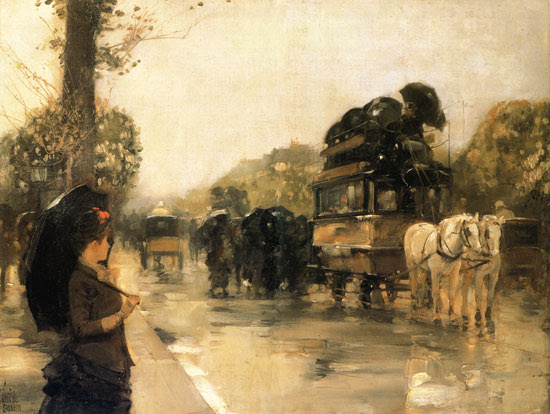 Hassam
SATURDAY CENTUS
http://jennymatlock.blogspot.com/2011/04/saturday-centus-april-showers.html
suggested the theme.
APRIL SHOWERS
I remember the tide of optimism; Summer was on its way.
Winter was receding; April heralded May.
As a girl I felt the sap rising higher, ever higher
As though everything in Nature was working to conspire
Against greyness, cold and lethargy, against discipline and school!
Then, every year it seemed the same, I became an April Fool;
While my heart was singing Summer songs down came the April Showers,
Battering the brave young leaves, decapitating flowers!
'Not yet!' the showers seemed to say; 'You still have a way to go.
Don't you feel a little chilly? We may even turn to snow!'
Was it good for my soul, maybe, to cope with disappointment,
When Summer made a date with me and then missed the appointment?
June, July and August still waved a beckoning finger,
But Winter kept a strangle-hold, determined it must linger.
And yet, that very fickleness was part of the Springtime joy.
Yes, April could be tantalising, teasing us, being coy.
But here, in another country, where Springtime just strolls in,
Where hardly anything marks the time when the warmer months begin,
I remember April Showers with a rush of real affection
And my heart is on a journey in a Northerly direction.
*
-----------------------------------------------------------------

SILVER CURVES
Spied in a shop window in a little country town,
Where Fashion wasn't high on the agenda.
I saw this silver corset, all set-around with flowers;
It had an air of quite voluptuous splendour.
It seemed from another era, Victorian maybe,
When waists were small and bosoms quite pronounced.
When curves were in, and skinny girls were something else again
And anything less than an 'armful' was denounced.
The young girls passed the window, in their T-shirts and their jeans
And scarcely gave the scene a second glance,
But I was back in bye-gone days , when a lady filled her card
With suitor's names who asked her for a dance.
*
Posted by Rinkly Rimes at 10:34 PM

Such a beautiful picture...

Beautifully written. I think April is a very fickle month. We still have snow sometimes. I just hope we don't skip spring and head for hot summer, ha.

If it's over the limit, no matter when it's so well done. Not only a great rhyme, but poetry, and considering the speed at which you must have put it together, even better!

You always have such a way with words! I love your poem(s)! That corset is really lovely and interesting, isn't it?

Really enjoyed both of these! Great job, as always.

Fabulous job ! Your poems flow so naturally. I loved both offerings and the bonus of a TWO-FER was a nice surprise !!!

Your poems are bouncy and enjoyable, with very strong imagery. I really like these.
xoRobyn

And to think that all I could come up with last week was a couplet. Nice!

Such a flair you have with poetry! These were lovely! Beautifully written and so visual. Nicely done!

Most lovely words, poems are the music to our ears....and both photos rock!

oh I love both of these poems ... i don't know how you can do these so fast and with such beauty ... your mind must be a beautiful place!

I love the romantic lyricism of both of these poems. The bottom one really spoke to me of the passage of time and the way the world has evolved.

I am always so impressed with your mad writing skills.

Thank you for linking.