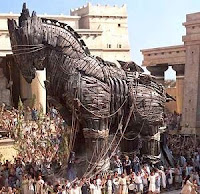 There is a Moral to this story
TROJAN HORSE!

Trojan Horses nowadays are simply just a feature
Of internet complexity, not a gigantic creature
Like this great horse that we see here, which certainly is no toy!
Yet I have to admit there never was a flesh-and-blood horse of Troy.
*
Paris of Troy stole Helen from Menelaus, the Spartan King,
Who then waged war to get her back, for she was a lovely thing.
For ten years Menelaus sought to pillage and destroy
The mighty city where Paris lived, which we now know as Troy.
*
At last he seemed to lose the will to fight to the bitter end,
The Trojans were too successful in their efforts to defend.
The attacking army then withdrew, for they were a true spent force,
But they left behind an edifice in the shape of a mighty horse.
*
This horse was sacred to Trojans, for it was made from the cornel tree,
So the horse Menelaus left behind was a wonder for all to see.
And he left an inscription which clearly said 'With this horse we now give thanks'
And then the army retreated, officers and all ranks.
*
The Trojans were delighted that the War had now been won,
They had seen the Spartans wilting, they had seen the Spartans run.
Now here was a mighty offering which they could all enjoy.
So they dragged and pulled the Trojan Horse inside the gates of Troy.
*
But the horse was full of soldiers! This the Trojans didn't know,
Though they found it very heavy and their progress very slow.
At last they had it safely inside the city walls,
And it is now Menelaus wins and the Trojan's city falls!
*
For the soldiers leapt out of the Trojan Horse, and the army then returned,
And the city of Troy was pillaged and ruined and wrecked and burned.
*
The moral of this story is that you can never win
If you just let down your guard and let Trojan Horses in.
Never let your computer have an ever-open door.
Remember the city of Troy and how it fared in days of yore.
*

Having been unlucky enough to let a Trojan in I know the damage it can do. The Trojan won that round, but I will win the others for I now have a better security system and will never again 'look a gift horse in the mouth.'

Thanks for retelling this story.

I knew the legend, of course. What I didn't know was that the horse was made of a 'sacred' wood to ensure the Trojans would collect him.

I am not sure how they get in but they do.
Thanks for this post.
God bless.

Can see that the poem's inspired from the disk loving Trojan, doing the rounds.