MEME EXPRESS
http://memeexpress.blogspot.com/
asks us to recall old movies (films to a Brit!)
At the time of the Great Depression I was a little girl. We rarely saw films, which explains why the influence of the few I saw was so great. I truly believed I was seeing Life as it would be when I grew up! (Which makes me worry about the rubbish little children see these days!) It took many years for me to shake-off the feeling that I was being cheated.Which may explain why I didn't marry until I was in my thirties. Of course, 'The Ziegfield Follies' were pure escapism, but try explaining that to a little girl!

It seems to me the films of yore
Have a great deal to answer for.
They led us to expect Great Expectations.
I grew up thinking life would be
One huge Broadway Melody,
Set to music, with no complications!
I knew, one day, Dick Powell would come
And a heavenly choir would start to hum,
And soon he'd take my hand and sing a chorus.
And all the Waiters round about
Would join the song, without a doubt,
And all the other diners would adore us.
Or else some Busby Berkeley girls,
With rosebud mouths and careful curls,
Would enter in a sinuous formation,
They might descend some golden stairs,
In groups of three or, maybe, pairs,
And everyone would gasp in admiration.
While Fred Astaire would swoop and glide
And be there smiling at my side
Before he whisked me off to Gay Paree,
And, all the while, angelic choirs
Which every scene of love requires,
Would sing their songs of romance just for me.
No 'naughty bits', and no-one nude,
Just a romantic interlude,
And when a little girl is only four,
She tends to take the whole thing in,
Not realising 'sex' and 'sin'
Are part of the life that, sadly, lies in store.
As I grew up into my teens
I waited for romantic scenes
But they were very rare and not inspiring.
Dick Powell never came my way
To say the words I'd heard him say
And noone did much swooning and admiring.
I came to terms, as people do,
With what is false and what is true,
But I never lost a sense of melancholy.
To think that it was all a lie!
But now I'm understanding why....
Florence Ziegfield!
You knew it was all  'folly'. 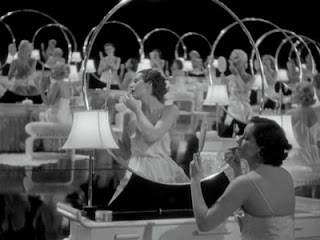 Another view of old movies here:
http://rinklyrimes.blogspot.com/2008/07/52-legs-labours-lost.html
Posted by Rinkly Rimes at 8:52 AM

RR, well done,
although girls today don't grow up with this particular folly they are indoctrinated by other equally as damaging follies. There's Barbie first then Madonna and later Sex and the City....all fostered by film clothing, music and TV.

I was born in 1956, but as a pre-adolescent who gradually aged into a teen, I watched a lot of late-night TV. On TV during the '60s and early '70s, there were tons of great old flicks from the '30s and '40s (and '50s to a lesser extent). I developed a love for a lot of the old actresses & actors, and their films.

As Bob Hope would have said (sung?), "Thanks for the Memories."

Always did like the Ziegfeld numbers. And a big Busby Berkley fan!

Good to know that Malcolm swept into your life and broke the myth :))))