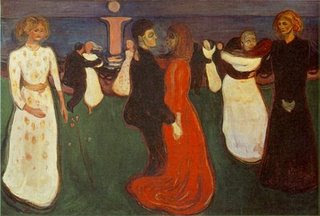 Munche
HEADS OR TAILS asks for an entry based on the word 'BALL'.

This painting is actually entitled 'The Dance of Life' but I wonder......

'Tonight, Berthe'
Said Mama, decisively, as always,
'We go to the dance'.
Berthe was folding the clean laundry
Fresh from the windy line.
She drew in her breath
And waited….
'The Minister tells me
It will be very suitable
As a young girl's first dance,
And I think you're of an age.'
'Of an age', means 'ready'
Thought Berthe.
And Berthe was ready, so ready!
'The cream dress will do'
Continued Mother.
'And you can put your hair up.'
Already the dance in the Church Hall
Was assuming the proportions
Of Cinderella's Ball!
As Berthe laid out her cream dress
And shone her black pumps
She felt the excitement mounting.
As she carefully brushed her hair
And caught it up behind her ears
The blood in her veins started dancing.
All by itself!
'The Dance of Life'
Thought Berthe.
'This is the beginning!
Tonight I'll find out.'
'Find out what, exactly?'
Said a quiet voice in her head.
'Tonight I'll meet a handsome man.
He will smile at me
With flashing teeth.
I shall smell the pomade on his hair!
I shall be close enough
To count the hairs on the backs of his hands!
He'll whisper into my hair
When Mama isn't looking!
He'll press me close
And tell me I'm adorable!
Tonight!
And how we'll dance!
A Bolero!
A Pavane!
Or even a Saltarello!
How we'll circle, how we'll spin!
How we'll fall,
Laughing,
Into each others arms!
'The Dance of Life!'
When they arrived, the Minister
Was winding-up the gramophone.
'Ah! A waltze!
How very suitable!' said Mama.
One two three, one two three, one two three.
'Dance with Uncle Arve'
Commanded Mama.
'He'll take you round.'
Berthe was clutched to a portly stomach
And perambulated.
One two three, one two three, one two three.
The gramophone began to wind-down.
The music went off-key.
'The Dance of Death'
Thought Berthe.
'The Dance of Death'

They went home early.
After all,
It was Berthe's first dance.

A very different approach to dancing here:
http://rinklyrimes.blogspot.com/2009/01/ps-rain-dance.html
Posted by Rinkly Rimes at 1:38 AM

Smiling to the expectations of the little girl, to meet that 'handsome'. Next time she'll learn to step hard on Uncle Arve's foot, that he'll run a mile and leave the girl alone :)))