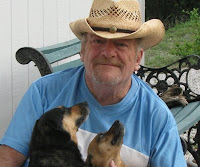 I think this is Dr John. (You never can tell, on-line!)
http://fortresslinna.blogspot.com/2009/05/friday-55-technological.html
I missed a competition of his with this title! When my daughter, Rebecca, drew my attention to this oversight, I thought I'd better catch-up.
DR JOHN SENT ME!

Dr John sent me a letter,
An email to be quite precise.
I looked at the name on the letter
And I thought to myself 'This is nice!'
He said that he's not a harsh critic,
In fact he is kind, through and through.
But when he reads this bit of nonsense
I wonder what Doctor will do!
He can't rip up this poem entirely
For it isn't the rippable sort,
But I fancy he'll quickly delete it
And give an old-man type of snort!
'Silly doggeral, woman!' .....I'll hear him,
As though he were only next door,
Then he'll throw off his wig in a temper
And throw it right down on the floor!
Then his wife, who is, no doubt, long suffering,
Will lay a cool hand on his brow
And she'll say 'Darling! See! She's upset you!
I'll get you a whiskey right now!'
It's strange how I see the whole picture
As though I were actually there!
'Rinkly Rimes sent you a letter!'
Send one back then! And see if I care!

I have no idea whose photo that is, but he has about as many teeth as Dr. John! This is ROTF funny!

You have vision and words to describe the vision. Nicely done! Thanks for visiting my Waterfalls

Hilarious. Thanks for the laugh.

ROFL! That is NOT Dr. John... don't know who it is... but not HE! If you would like to see the REAL Dr. John, and his beautiful wife, Betty, go HERE! He is gonna LOVE this -- and you are probably going to get a really bad poem in response!!!

I think Dr John will no doubt write a poem in return. And I think deep down he will be thrilled with it. I am sure he will save it.

I loved it . But now for the corrections.
I never drink whiskey or anything alcoholic.
I have my own hair and no wig. I could throw my false teeth but they would break.
But my dear wife is long suffering so that part is correct.

Too cute - and how nice, Dr. John has commented too!