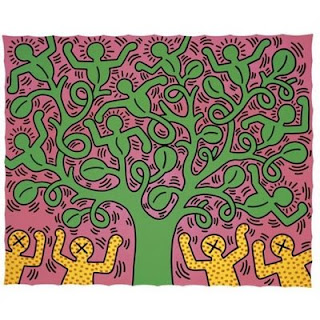 Keith Haring
Here is this week's artwork from
SIMPLY SNICKERS
http://simplysnickers.blogspot.com/2009/05/poetry-prompt-through-sunday-may-10.html
FRUITFULLY FRACTAL
Since before the time of the pterodactyl
The Tree of Life has been a fractal.
Branches, sequence, repetition
Have been the mark of each new edition.
Take the broccoli! There's some here!

The repetition is quite clear.
Everything ends the way it begins,
With twins and twins and twins and twins!
Mandelbrot revealed this fact
And now we're all in on the 'fract.'
Take the humble Lantana flower,
(A weed which makes every gardener glower!)
Look closely at its round perfections;
Repeats, repeats in all directions!
*
But I take issue with the illustration;
Humanity's caused a deviation.
Unlike the picture, we're not clones,
Built with identical shapes and tones.
Because we are such complex creatures
We all have different facial features.
Our breeding pattern is so ad hoc,
Chips aren't off an identical block.
But, broadly speaking, we're fractal too;
Eyes, ears and feet.... we all have two.
In many ways we fit a mould
As amoeba did in days of old.
And so, dear artist, thanks a lot,
For honouring Mr Mandelbrot.

Here are examples of fractal art.
Mr Mandelbrot! You were smart!

More about this fascinating subject here:
http://rinklyrimes.blogspot.com/2008/07/75-perpetual-pattern.html
Posted by Rinkly Rimes at 1:31 AM

Interesting poem! I am glad that God broke the "pattern" when He created us, and no wonder the pattern was broken as He declared that He made mankind "in His own image"! (Genesis 1:27) What a tremendous honor He has given us, and what a tremendous commission!

Thanks Brenda, for all your effort and for sharing some of your teacher's intelligence with us. (I always learn a new word or two when I peruse your poetry! Today's word: fractal!)

if only they had brought a rule to depict science thro' poems....