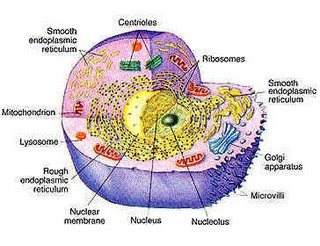 
You are advised not to use this poem for serious study!
NUCLEAR FIZZICKS!


You have about ten trillion cells, well, give or take a few.
All of them involved in making you the unique 'you'.
I celebrate the Nucleus, the centre of the cell,
For there sits a powerful memory bank which serves you very well.
Imagine the size of a Nucleus! It's beyond our comprehension!
Our minds cannot cope with things with such a small dimension!
If we could make cells large enough to cover a whole city
We'd see how intricate they are, but we can't and that's a pity!
The Nucleus has a nucleolus lurking deep inside,
And that deals with the ribosomes. I think they're modified.
Ribosomes deal with synthesis; they appear to float about!
Some are inside the Nucleus and some of them are out.
'Smooth endoplasmic reticulum'! A rather tasty phrase.
I think it just means 'stuff' myself, but it helps in many ways.
Other things float inside it, like cherries in a bun,
One of them's mitochondria; now that's a clever one!
Mitochondria make energy, and help us run around;
Mitochondria are rod shaped but circular ones are found.
There are many more bits and pieces, too many for my brain,
I merely 'Googled' all of this to set this verse in train.
There's more! Three hundred million cells each day curl up and die!
How do we do without them? How on earth do we get by?
That's three hundred million Nuclei lost and gone for ever!
I fear for my poor addled brain it's all a bit too clever!
I've lost so many nuclei just working on this verse
That I think I'll have to put the whole darned process in reverse!

Hi Brenda, I've popped onto your blog since meeting you on mine! I'm fascinated that you've lived in Zimbabwe AND married a man from Cape Town. Did you live in South Africa at all? I love your poems and will be back. Hugs Jo

Great poem! Now I know it's possible to poemizise even such dry materials. Thanks for stopping by and I'm afraid those bags you mentioned will wave goodbye to us human beings when we have outdone ourselves on this earth :)

Wow! A Physics lesson in a poem. I wish I could remember all the information you gave us, but my three hundred million memory cells have died and have not been replaced.

Nuclear "Fizzics" - so funny and clever.

Normally I'm not fond of poetry, but this is great fun.

Clever - as usual! You seem to a gene or a variant nucleus that puts you in a constantly creative mode. I have to drag myself to the computer and command procrastinating self to "Write!"

I should have had that poem when I taught Anatomy!

Your poem is so very helpful. Clever as always. Who'd have thought of Nuclear Fizzicks?

Hahaha! I love it! Don't worry about all the cell death, it's been going on since you were born, and you're not dead yet, are you? LOL!

Love your poem! You are so clever. Working with 'scientists' every day it is a breath of fresh air to have some one actually do a spoof on all this technical mumbo-jumbo!

Wow... you're also talking in millions and trillions, like everone else..!!!!!