MY TRUE COLOURS requests an entry based on the colour LIME

'Unter Den Linden' means 'Under the Limes'.
The German sounds lilting and sweet.
Whereas 'lime trees' (the same things) sound rather ho-hum
Though they brighten the grey of the street.
I enjoy saying 'Unter Den Linden', my friends,
I sound like a linguist of worth!
Although it's well known that the English (I'm one)
Are the very worst linguists on earth!
The street with this wonderful tongue-curling name
Can be found in Berlin you will find,
Friedrich Wilhelm, mid-seventeenth century,
Said his new road should be linden-lined.
From his palace the boulevard ran straight and true
To his hunting-lodge some way away,
And what was a treat for the rich in those days,
Now pleasures pedestrians today.
For three hundred years the street kept its charms,
The most elegant street in the land,
For statues were added, of generals and such,
To make it more striking and grand.
Came the Second World War and  the trees were destroyed,
Used for firewood in times of distress,
And the street lost its charm amid ruins and death,
Unimportant in times of duress.
But now it's rebuilt and it's glory restored,
And we tourists can go there and see
Just how history, pride and a name that's well-known
Can transform just a ho-hum lime tree! 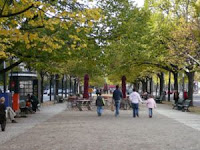 nice. the opening pic is amazing! be back tomorrow for TT!

So sad what war causes, but this was a beautiful poem. Wonderfully written. Great picture and thankfully they were restored. Really nice.

Lindens are lovely. I liked your poem too.