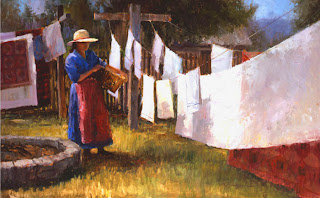 
When I saw MEME EXPRESS was suggesting MONDAY as a topic, old memories flooded back. This is a very unsympathetic look at Washing Day. It's only now that I'm older that I can appreciate what a burden it must have been.
http://memeexpress.blogspot.com/2009/04/monday.html
MONDAY BLUE BAG

Was it only in England that Washing Day seemed art,
An art in which I never really wanted to take part?
Was it only there that Washing Day seemed so reverential,
As something gloriously great and vitally essential?
Mother would wake on Mondays with a steely earnest look,
Not because she had to clean the house or even cook,
But because our clothes were dirty, well 'filthy' she averred,
And we tried to disagree with her but couldn't say a word!
There were blue bags, steaming coppers, starch, a whole array of tools,
For Washing was a skilled technique and one must obey the rules.
An air of damp pervaded every corner, every nook,
And the house, with her exertions, groaned and positively shook!
After the clothes were pounced upon and wrestled till they shone,
And the bleach had done its gruesome work and all the dirt had gone,
She had to do the rinsing, with a great amount of splashing,
And all the while, with obsessive glints, her steely eyes were flashing.
She then approached the mangle, with an air of grim defiance,
For the mangle was a nasty beast, much more than an appliance.
With a grand array of muscles, she turned the handle round,
While making sure the sheets were never dragging on the ground.
Then it was off to the clothes line where she hoped to catch a breeze,
While little flurries of English rain did what they could to tease.
It was in and out with the washing, dashing between the showers;
The ghastly, awful process seemed to carry on for hours.
But all the time she kept an eye on the line of 'her next door';
The battle of the Whitest Wash was just like a World War!
Finally, in the laundry basket, items were collected,
For Tuesday must be Ironing Day, traditionally respected.
Then, of course, we had the Monday Meal at dinner time;
Anything other than rissoles would have been a heinous crime!
She dumped them down in front of us, with a loud and weary sigh;
We didn't expect lightheartedness, but she didn't even try!
'I don't think that they're up to much' she often used to say;
'But after all, I can't be blamed!
Monday is Washing Day.'
Posted by Rinkly Rimes at 2:34 PM

I remember those days very well. It holds a lot of wonderful memories for me... Thank you for your visit. I also enjoyed your music! an oldie but a goodie :)

Monday is washing day here too!
Sorry it has taken me a week to get round to visit you, but welcome aboard and thanks so much for contributing!

God made me an atheist, too.

I remember washing days as a child in Poland. It involved boiling the sheets. Yikes. We've come a long way.

To quote Maurice Chevalier in Gigi, "ah yes, I remember it well".
We did ours on Saturday morning and I was the bunny. Everyone worked during the week and I went to school. Mother shopped on Sat. morning so I was out in the wash-house lighting the copper and scrubbing. I am glad we have a machine now.
Beautify saga of washing day.

I certainly don't miss doing the laundry that way any more. Good ole days, no thanks, I'll take my automatic washer and dryer.

I feel sorry for my wife :)
She's taken the entire responsibility for washing.
Sigh... I need to lend a helping hand!