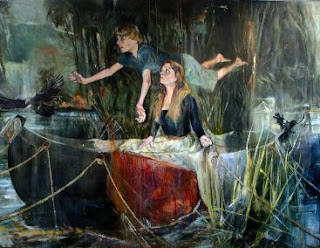 MEME EXPRESS
http://memeexpress.blogspot.com/2009/04/comedy-history-or-tragedy.html
calls for a tragic  tale.
Here's mine.
(The above illustration is something of a mystery. When I was looking for a picture to illustrate my account of a convict's death on the Hawkesbury River, near here, I came across this depiction entitled
'Ghost of a Convict; Hawkesbury River' It cried out to be used but I'm not sure what lies behind it! )
Solomon Wiseman was an early 'settler' in Australia.
His complete story can be read in an earlier blog entry here:
http://rinklyrimes.blogspot.com/2008/11/192solomons-wisdom.html

A CONVICT'S GHOST!
Solomon Wiseman was a rogue, working for him was stressful,
Though you find yourself admiring him for being so successful.
Many convicts worked for him, often for seven years,
Having to cope with the lashings, the insults and the jeers.
One man, let's call him William, had completed four years at last,
Four years of deprivation were, happily, in the past.
A remark about 'good behaviour' was noted on his report,
So a ticket-of-leave was justified and a ticket-of-leave was sought.
William wanted to see his sweetheart, who lived in Sydney Town,
So he plucked up courage to ask for it and Solomon turned him down!
He not only rejected his pleading but punished him as well
By putting him under an overseer whose methods were pure hell.
William was put on a road gang, with leg-irons to hold him fast.
But against all odds William got away. Though I fear the die was cast.
He tried to swim the river, but the leg-irons with which he was bound
Were much too weighty for swimming and William, young William, drowned.
Those leg-irons are still heard clanking, or so the locals say,
A message from young William, who failed to get away.
Posted by Rinkly Rimes at 10:04 AM

A beautiful image and haunting verse.

and to this day I give leave to my subordiates as many days as they want for their marriages :)))