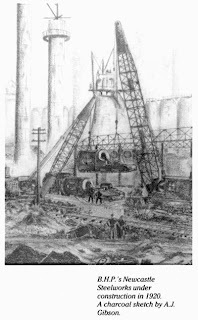 THAT'S MY WORLD encourages us all to learn about each other.
This is what happened to my present home town, Newcastle, in Australia.

We arrived in , over thirty years ago. It was a filthy industrial town then. Of course, the beaches and lakes and parks were there, but dust seemed to cover everything. BHP (Broken Hill Proprietary Company) kept the city wealthy and it seemed as though everyone worked for the Steel Giant.
(In my poem it seems I was Steelworker! But that's just imagination.)


Then BHP closed. We all expected to go into decline but, instead, it has been reborn as a pleasant resort city.
Let's hope it survives the present downturn.

's a city that's built by the sea;
When we think of its future we're proud as can be.
But there once was an edifice called BHP!
And the smoke billowed out of the smokestack.

And the ash kept on tumbling all over the town,
And the washing turned black and the flowers turned brown,
And sometimes the air seemed like clouds falling down
When the smoke billowed out of the smokestack.

But the day of the closure resembled a wake,
When the big men of business took all they could take,
And left us our beaches, our river and lake.
No more smoke billowed out of the smokestack.

Now glows with a sparkle and shine,
We can laze in the parks, we can go out to dine.
But, still we remember that life was so fine,
When the smoke billowed out of the smokestack. 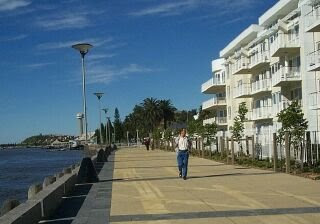 A big change!
You may enjoy a earlier poem of mine on this same subject
http://rinklyrimes.blogspot.com/2009/03/322-guard-dog.html
Posted by Rinkly Rimes at 1:45 AM

What a lovely story captured in your poem.

It sounds similar to Middlesbrough here in the North East where the British Steelworks used to be. It was one of the biggest employers and I visited it when I was a careers adviser. I didn't belong to the area and I was shocked when I saw the environment. Miles and miles of total devastation.

It's gone now and Middlesbrough is developing but still has a long way to go. Hope it's as successful as Newcastle, OZ.

It is a lovely story, Rinkly, and what a lovely photo! What a change! Wow! that's marvelous! Great poem, as always!

Brenda: What a neat look at the cleaning up of the your town. Everyone must think this is a great imptovement.

Very nice post. The picture of the waterfront is really beautiful. It's so clean.

Yes, when one lives so long(!) and can look back the changes for the better can be seen. Living through them the changes are imperceptible. Now my own visits to the south shore of Long Island are in wonderment - prosperous looking neighborhoods and well kept parks. And Jones Beach once more a gem of a beach with fine landscaping from the car parks to the ocean. Well said! How fortunate we are.

Quite the dramatic change, here. And looks for the good of all. Reminds me of all the darkened skies one sees in China's heavy industrialized cities, to-day. Or over here( in the U.S. ) on the upper east coast. Not a lot of improvement.

Great poem and shots of an interesting subject.
Way back in the 50's I had a boyfriend who ws a chemical engineer student working at BHP in Newcastle and he took me through the steel works I was amazed at the beauty of watching the molten steel being poured but I wasn't impressed with the filth in the air.

Thanks for sharing your history..Very interesting post and poem!

It's true: so often we lament what "progress" leaves behind, but once progress slows, we see for the first time how much it provides, and that we can't get along without it.

what a interesting post. and i enjoyed your poem as well. let's hope that newcastle survives this blip in the economy...
have a lovely week.

The oldest blogger, Olive Riley, is dead now, but I have a video of her when she returned to her home town, Broken Hill. Her blog was "The Life of Riley" and you may be familiar with it.

Although she did not physically enter her blog, the content came from and about her. She was quite an Aussie.

In the other poem you had sweetly concluded...