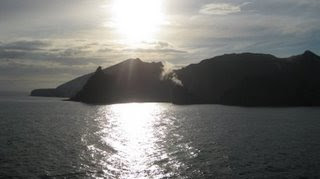 On our recent cruise around the coast of New Zealand we deviated into the Pacific Ocean to visit a volcanic island known as White Island. It was the blackest thing I'd ever seen!
But the sky was white so I publish it for SKYWATCH FRIDAY!

WHITE ISLAND
We sailed around White Island into approaching night
And the sunset wasn't fiery; in sympathy it was white.
And the puff of volcanic smoke was white like the breath of a mighty beast,
And the clouds were echoing sun and smoke as our backs were to the east.
But the island wasn't white at all, regardless of its name!
It was heavy, black and Gothic like the depths from which it came.
But deep inside White Island, as we were sailing by,
We knew that mighty forces were yearning for the sky.
For the centre is made of sun-stuff  and it's longing to return,
And, when it does, the sea and sky will burst into flame and burn!
Posted by Rinkly Rimes at 3:10 AM

What a lovely cruise that must have been. Your photo is spectacular. Happy Easter!

The photograph of White Island is beautiful. I love the silvery sea.

so I wonder why it's called White Island then?

Great photo - reminds me of that other island in Italy called Stromboli (also the name of the movie) about which director Rossalini made, starring Ingrid Bergman when both shocked the world with their adulterous affaire!

Ironical - the white Island to look so black. The last two lines of the poem sends a chill to understand the fury lying within.

I find it fascinating how the sky chooses to paint everything below it. The contrasts are eminently memorable and powerful. Gorgeous choice for this week's theme...I can almost feel what it's like to come across this island - your photography does that often!

great shot, makes me want to go there.