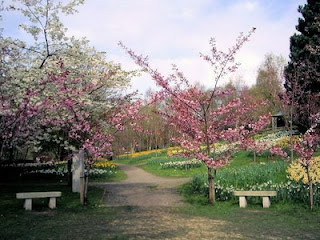 OH TO BE!
Oh to be Robert Browning and have the gift of words
To conjur up an England full of daffodils and birds.
To write for generations who still feel just the same....
That aching surge of Englishness that doesn't need a name.
The country of our childhood is buried in our hearts
And as soon as April comes around the same old yearning starts.
RR
Home Thoughts, From Abroad
By Robert Browning

Oh, to be in England,
Now that April's there,
And whoever wakes in England
Sees, some morning, unaware,
That the lowest boughs and the brushwood sheaf
Round the elm-tree bole are in tiny leaf,
While the chaffinch sings on the orchard bough
In England--now!

And after April, when May follows,
And the whitethroat builds, and all the swallows!
Hark, where my blossomed pear-tree in the hedge
Leans to the field and scatters on the clover
Blossoms and dewdrops--at the bent spray's edge--
That's the wise thrush; he sings each song twice over,
Lest you should think he never could recapture
The first fine careless rapture!
And though the fields look rough with hoary dew,
All will be gay when noontide wakes anew
The buttercups, the little childrens' dower--
Far brighter than this gaudy melon-flower.
*

I like your 'humble' words - your point is very heartfelt. No beating about the bush! But I can't seem to find a way to Winifred's patch from which the lovely spring scene springs.

To me you have the gift of words - Robert Browning has a close competitor.

lovely and a good piece of verse from you too!

Howwwwow you love and yearn for England..!!

My Sis daughter's name is Daffodil.

I like the way that you blended the visual image with the poetry. it is not only a celebration of England...but spring as well!

Wonderful images and poems....perfect for me in California, as we are just beginning to enjoy Spring, and the daffodils are blooming. Thanks!