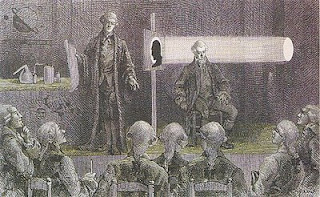 Silhouettes are usually
BLACK and WHITE,

the colour combination suggested by MY TRUE COLOURS this week.
http://poopsiestruecolours.blogspot.com/

The history of the name is fascinating.

Etienne de Silhouette. Do you know the name?
And do you understand the reason for his rise to fame?
He wasn't any hero, that we must admit,
And the people of his day and age didn't care for him one bit!
He was a Finance Minister in eighteenth century ,
And his penny-pinching ways caused folk to look at him askance.
His hobby was paper-cutting, making portraits, black and white;
Such art-work was quite popular and quite a common sight.
But he cut the Budget to the bone , causing penury for the poor,
And so 'cuts' became his trade-mark as people suffered more.
'We'll only dress in black!' they cried 'To show our discontent!
The black of Monsieur Silhouette we're going to represent!
The rich may have their colours; we poor must do without.
Soon he'll get the message, of that there is no doubt!'
And, sure enough, poor Etienne was turfed out on his ear!
His cuts had been unpopular, people had made that clear.
But his name has lingered on till now, in the art of silhouette.
Even in this day and age the system's with us yet!
This black-and-white form of portraiture still has a certain charm,
And we still view Finance Ministers with something like alarm!

A Modern Silhouette by Karen Dickel-Jonasch 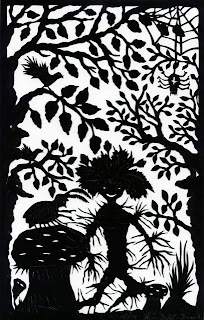 Bravo! You are brilliant! What a fun and charming way to educate people. Through poetry! Loved it!

I love this silhouette!

Come to think of it..
Yet to come across a colourful Silhouette..!!