SUNDAY WHIRL
http://sundaywhirl.wordpress.com/
asks us to use all the words in the Wordle

How many years have passed, my love, since you and I were young?
You came back into my mind, my love, when a certain song was sung.
'A fella with an umbrella' those were the words I heard
And, suddenly, I was young again, even though that sounds absurd.
By now you've become an old lady, and maybe your memory fails,
But I hope you, too, have a mental picture that never ever pales.
*
I remember a day of thunder......it seemed it would never stop.....
And my Auntie Anne, your Mother, said 'Just run to the shop.'
We started making excuses.....'The light has nearly gone!'
'The puddles are getting deeper!....on and on and on.
In the end we were persuaded to brave the stormy sky,
And so we set off, laughing, the umbrella held up high.
*
The shop was really very near, just half-way down the lane,
We got there without much trouble, but then, down came the rain.
It was a childhood adventure; we decided we would stand
Close by the wall of the church-yard, which was quite close at hand.
We stood so close we were almost joined and it suddenly came to me
That this was the very relationship which was clearly meant to be!
*
For thirteen of my fifteen years you had been around,
And yet here were brand new feelings I had suddenly found!
'I'm going to marry you, Amy.' Suddenly the words were said
And I kissed you under the umbrella!......... You flushed a rosy red.
'Don't be silly! We're cousins!' you said and ran home again
While I was left feeling foolish, all alone in the rain.
*
'Amy! You're soaked!' said your Mother; 'Tom should have kept you dry!'
You hung your head, determined that you wouldn't catch my eye.
Long ago you parted from Peter; and my marriage just didn't work out;
Never again, in my whole life, did certainty replace doubt.
I vowed I would forget you and inherit my place in the sun,
But you were always in my mind, you were always the one.
*
And now, though memory shifts and fades, I still recall the umbrella,
And that wonderful moment in the rain when I truly was 'your fella.'
*
------------------------------------------- 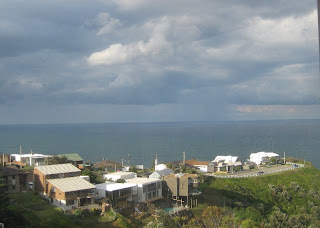 A LOT OF SEA

A scene of domesticity
And yet one of enormity
Because although our town's terrific
It's perched on the edge of the great Pacific.
Little houses huddle by
The vastness of the sea and sky.
We look out on a placid scene,
Boxy houses, gardens green,
Yet if we shade our eyes and look
Beyond our cosy little nook,
We see eternity flowing by;
Eternity of sea and sky.
South America's 'over there',
Way, way off in the east, somewhere,
Over the curve of the earth, then on,
Further than many folk have gone.
Water, water everywhere
Nothing but water and thin air!
And, underneath such life is teeming!
We only see the wave-tops gleaming,
But sea-creatures are living, thriving,
Bounteous numbers coiling, diving!
What audacity for us to think
That we, who're living on the brink,
Building little fabrications,
Tiny human-sized creations,
Matter at all! We can't defy
The vastness of the sea and sky.
*
Posted by Rinkly Rimes at 5:44 PM

We can't defy
The vastness of the sea and sky.

You can say that again! :) Two for the price of one again - does that make you a bargain poet? hehehe!

Wow...two great works to read. I love the story. And yes, we cannot defy the vastness of the sea and sky.

I so loved the first poem, and envy you, in the second, living on the Pacific. Our Island is, but I am an hour inland, which is too far from the sea for me!!

Each of them as wonderful as the other. I love the prose piece alot, the memory of the one true love and how we never really let go. And the second was beautiful and austere. Loved them both, great work.

I also loved them both, Brenda. You did wonders with the Wordle, making me think of my first love— whom I actually didn't recognize when I met him 15 years later.
By then, I lived in a town perched on the edge of the Pacific (although many islands are between it and the wide open ocean).
Now I live on the prairie and I miss the ocean far more than I miss that young man.
K

Oh my goodness, your second piece made me yearn for a home by the sea. A desert-dweller, I'm finding that the week or two each year I manage to be by the sea are no longer enough!

way fun rhythm you have going in your song. there is an interesting attraction between cousins - a familiarity and a strangerness both. it is a unique relationship.

the second work has that all powerful point that brings it all together - i like that - that amazing and vast sea and sky. cool. aloha.