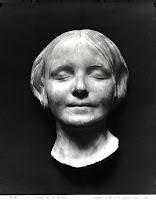 You don't know about me....
*
And you never will.
*
When first they plucked me from the Seine
They only saw
Hair like seaweed,
Orifices filled with mud,
Clothes dishevilled and filthy,
Maybe creatures
Of the water
Now part of me.
*
They laid me on a slab
In the morgue
With all the other bodies
Set there for recognition.
*
It was then they noticed my smile!
*
There,
Among the gaping, twisted, macabre faces
Of other suicides,
Was my face,
Smiling,
Serene,
Beautiful and young.
But, above all, smiling.
*
I must have been happy to die!
*
You don't know about my past.
*
You never will.
*
Shopgirl, nanny, mistress,
Pregnant?
That's my secret.
*
But you loved my smile so much
That you preserved me
In a death mask.
*
No-one ever claimed me.
No parent, friend or lover.
I remained Unknown.
*
But my lips have been kissed
By more people
Than any other lips on earth!
*
What was my name?
Berthe? Yvonne? Mathilde?
Who knows.
But the whole world knows me as
L'Inconnue.
*

Read More:
"The popularity of L’Inconnue did begin to wane as the century went on, but her image was revived in the 1960’s, thanks to a new development in medical training. In the 1950’s, Dr. Peter Safar refined a system of lifesaving techniques that eventually became known as CPR and he recruited a Norwegian toy manufacturer, Asmund Laerdal, to produce a mannequin on which these techniques could be practiced. As he created this mannequin Laerdal was inspired to give it the face of the young woman who drowned in the Seine, thus allowing CPR trainees to symbolically save her life. By now, Resusci Anne (or CPR Annie as she is called in the U.S.), has been saved thousands, if not millions of times over, and her face has become known to new generations of admirers as “the most kissed face of all tme”. It’s a fitting tribute to L’Inconnue, whoever she may have been, in that her ultimate legacy will not only be tied to tragedy and death, but to compassion and survival."

That was so fun to read. They never take use seriously, do they, when we say we are going to stay in bed?

"What!? Mom in bed", they say in pure outraged disbelief.

Please do not tell me that you have read that book...I am not reading it on principle, not because of the content, but because I hear it is appallingly written!
Funny and clever poem!

Yes, there was a certain smile at your first piece but the accolade must be for L'Inconnue which was a delightfully poignant and uplifting tale.

Wonderful pieces, both, on this near-missing-prompt weekend!

‘Retreat’ was such fun to read, so clever and well done!

And there in the story of L’inconnue—though sad in fact—ran a sweet strain of contentment.

Seems like I missed the boat on what Sunday Scribblings is all about; I'm using your post as my prompt -- oh well as long as we are creating words -- cute poem. -- I retreated to a room of white on white, neutral states of mind seemed to dwell, then I saw from the corner of my eye, daisies and I smiled. Blessings Terri

I so enjoyed Retreat - good for Mum I say!