All size is relative, whether large or not.
A dot is a very normal size if one happens to be a dot!
The Lilliputians were normal, till Gulliver appeared.
Only compared to the little folk did Gulliver look weird.
Because we humans are puffed-up with an inordinate pride
We use our rather puny size as a universal guide.
Mountains are large. Compared with what; the size of the Milky Way?
A mouse is small. Except, of course, that's not what an ant would say!
It's only when comparing, that size has validity.
Every size is 'normal', or so it seems to me.
'Look at that tall man!' I say, but that is just my view;
If he's standing next to a redwood tree he's pretty tiny too.
He's large and small at the self-same time! So large just equals small!
The Universe and a Nucleus? Alone? No 'size' at all!
It's only when we compare them, looking through human eyes
That our perception labels them!
We need cutting down to size!
* 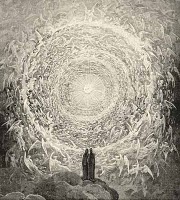 
They talked about Pythagorus. I heard his name for years;
They linked him with geometry which, of course, bored me to tears!
A school-girl, sprouting hormones, is more inclined to dream
Of the schoolboys in the school next door, than some great cosmic scheme!
I did my best with theorems, they just had to be learned,
But they were pretty useless, and no great passion burned!
So much of the talk washed over me till just one phrase jumped out!
'The Music of the Spheres' they said! Now, what was that about?
*
Pythagorus thought that numbers created harmony,
And a mathematical formula gave rise to melody.
He declared this universal, and said it must be true,
That the planets in their orbits created music too.
Mankind was deaf to the music, so the great man said,
Because it was so evil and because its soul was dead.
He declared that only goodness could make men hear the sound
Which was humming in the cosmos and whirling all around.
*
Now, knowing I was faultless and a being of great worth
I felt that I was qualified, of all the folk on earth,
To hear the magic music that was hovering in the sky.
I would listen! I would give this grand idea a thorough try.
So I hovered every night the sky was starry bright and clear,
Straining my ears to hear the notes I knew that I should hear.
Nothing! Just Sounds of Silence! And I was under-awed!
In fact I felt Pythagorus was nothing but a fraud!
*
But lo! I waited sixty years and then at last I heard
'The Music of the Spheres'! And, yes, I know it sounds absurd!
One night on the radio a scientist declared
That the 'Echo of the Big Bang' could be listened to and shared.
He played recorded 'tinklings', like iron-filings dropped on glass,
And I was back in my girlhood, in my Mathematics class!
Maybe I've grown immensely good with the passing of the years!
I only know that I have heard 'The Music of the Spheres'!
*
Posted by Rinkly Rimes at 10:52 AM

Bravo, Brenda. Your first poem is so very, very true, and I laughed with the second one. Don't we all feel we are special, the only one to hear or feel or think or do something no one else feels or hears or thinks? So, in both poems, I, a puny human, am brought swiftly down to size.
K