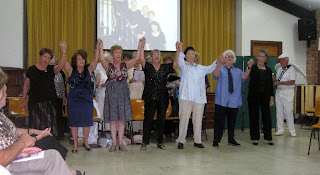 asks us to use all the words in the wordle
ON STAGE!
(All true!)
You must have known I'd respond to this for the greasepaint's in my blood!
I've been addicted to drama since long before The Flood!
And, tomorrow, we are staging two more of my little plays,
In our local 'village' hall, before the public gaze.
You may ask what drives us, since we're all quite long in the tooth,
Quite devoid of the previous charms which sustained us in our youth!
We say we know our limits, but we still go over the top!
We carry on singing regardless, and we don't intend to stop.
You'll see us with the gestures, the wave of a manicured hand,
The accents and the deportment of the grand and not-so-grand.
Our delivery is faultless.....well, ten percent of the time.....
And to make it easy for them I write everything in rhyme.
We don't disclose the sources of the plots that make our plays;
But let's admit we take liberties in many, many ways!
May the generation that follows inherit our childish verve,
Even though there are some who say
'My God! They've got a nerve!' 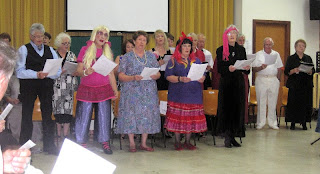 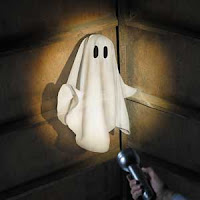 GHOSTEST WITH THE LEASTEST
I think ghosts are memes!
That's the way they strike me.
I don't believe in a single one
And there are others like me.
Somebody aeons ago
Thought up all that baloney
And 'believers' down the ages
Have latched-on to the phoney.
Maybe somebody was downcast,
Maybe newly bereaved;
He imagined he 'saw' the departed
And his story was believed.
'I've seen one too!' cried the masses,
'In the middle of the night!
Oooooh! It was terribly creepy!
It gave me such a fright!'
And, bit by bit, the meme caught-on,
Part-serious and part-fun,
And soon the idea of haunting
Was believed by everyone.
I've never seen a poltergeist,
I've never heard chains rattling,
I've never heard a spooky voice
With its other-worldly prattling.
So I'll continue to disbelieve............
*
Oooooh! One might come and get me!
Until it does I wont allow
The idea to upset me!
*
Posted by Rinkly Rimes at 1:51 PM

Am sure people must've been delighted with the staged plays, of yours.

Loved the...
...the wave of a manicured hand,
...The accents and the deportment of the grand and not-so-grand
...Our delivery is faultless.....well, ten percent of the time....

How special it is that you have a group of like-minded women who can enjoy doing things like singing and acting... delightful!