Once Upon a Time
HAPPY BIRTHDAY MARGARET!
So! Have that many years gone by
Since first we met? Now you and I
Are venerable ! Years are weighty.
How did we ever get to eighty?
Letters, photographs have whirled
Back and forth across the world.
Now it's in my blog I say
'Margaret, have a lovely day!' asks us to make-up our own fairy-tale


DRAGONFLY
(A poem for children)


It was the rule; the last-born Fairy never had any wings,
Though she had charm and beauty and a lot of other things.
As soon as Sylvie was old enough, her Mother said, with a sigh,
'You are the last-born, Sylvie; you will never, never fly.
It is a rule of Fairyland that cannot be disobeyed.
But you will enjoy your little walks each day through the Magic Glade.'
But Sylvie did not enjoy her walks, for she saw her sisters flying,
And many a time she sat on the grass, with her head in hands, and crying.
Her sisters fluttered overhead, and, in voices sweet and clear,
They'd call to her 'Oh Sylvie! It's beautiful up here!'
One day, while walking by the lake, she saw a dragonfly;
It's wings were so transparent, etched there against the sky.
It  fluttered here and fluttered there, and Sylvie's envy grew.
'Oh dragonfly' she cried at last ' I so want wings like you!
And if I can't have them I'll make sure that you lose yours as well!'
And she hit the dragonfly with her hand and watched it as it fell.
It lay there, helpless on the ground and Sylvie made a cup
Out of her hands and, heedlessly, she picked the dragonfly up.
'I'm going to tear your wings off!' said Sylvie, angrily.
'I'll make sure that you can't fly, then you'll be the same as me!'
But then she looked more closely, and she saw the different hues;
The flashing pinks and yellows, the aquamarines and blues.
She saw the delicate body and the clever little head;
She saw the creature was wonderful and this is what she said....
'Fly away, little dragonfly; you're one of life's lovely things;
I can't let my anger deprive you of your pretty gauzy wings.'
She placed the dragonfly on a leaf and turned to walk away,
But a sudden, strange sensation made her stop in her tracks and stay.
Right in the middle of her back a miracle had occurred!
Some wings had grown! Now she would fly as high as any bird.
She would swoop and soar and play with her sisters in the sky!
But her wings were not the same as theirs'..........
She'd the wings of a dragonfly.
*
------------------------------------------------------------------------------- 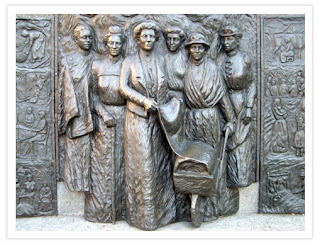 AFFINITY
I feel a great affinity with women of the past;
Those brave souls who took the flag and nailed it to the mast.
Their suppression over time, over the centuries,
Their suffering and servitude, their painful histories.
Those clever women treated as the utterly inept;
Those women who just married and then were merely 'kept'.
They would fidget under the stupid rules that kept them second class;
Their treatment as just ornaments, which made their lives a farce.
Their brain-power wasted over years; their physical strengths ignored;
Mentally chained to kitchen sinks, while all the time their spirits soared!
Not to mention their hard-worked bodies, with children every year!
Could I have been a Suffragette and overcome my fear?
I think I'd have lacked the courage and merely toed the line;
But I thank them for the freedom and respect that now are mine.
*
Posted by Rinkly Rimes at 7:35 AM

Somehow I missed this ONCE UPON A TIME birthday wish of last March. Thank you! It is wonderful having a friend, still alive, who alludes to shared events of the past. (In passing, I just saw a photo of your grandmother....) We have come a long way from much letter-writing, haven't we! And I do marvel that we had the good fortune to meet at all, and kept going: you with the verbal, and me with the visual... and, sometimes, we have actually put the two together in a ways that I (perhaps we) could not have imagined. I love blogging, thanks to you!