asks us to write about 'affairs'
HAVING AN AFFAIR.
I suppose it's different now;
Judging by what I've seen
Either in the cinema
Or on the TV screen.
Young couples meet by chance,
Decide that they will pair,
And in a nano-second
Talk of having an affair!
They're hopping into bed
Before they're even friends,
And equally as quickly,
The sudden passion ends!
In my young day it was different;
Gentlemen sugared the pill;
They always said 'I love you'
And, sometimes, 'I always will'.
They didn't mean a word of it,
But we were so naive
That we just went along with it,
Just wanting to believe.
'A love-affair' was the title
Given after the event,
When nice young girls discovered
What really had been meant.
(I don't refer to 'the real thing',
An actual romance,
But to the meeting-and-parting
Social game of chance.)
'An affair' was often illicit,
Which added a touch of spice,
And I speak from experience;
I've been there.........only twice.
I didn't know they were 'affairs'
Until they were in the past;
I always felt it was 'true love',
Something I thought would last.
Today's approach is honest,
Though clinical, it seems.
I think I prefer sixty years ago,
Even with the shattered dreams.
*
------------------------------------------------------------------------- 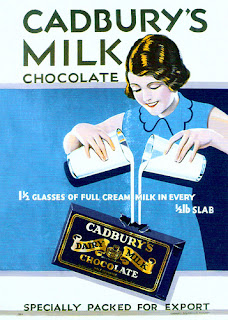 MANIPULATED MINDS!
I remember this advertisement from way, way, way, way back!
And I remember never doubting it was true!
I knew that where my chocolate was made there was a girl
Who poured the milk, not one glassful, not two!
No one-and-a-half was the answer, a magical amount,
Which made the chocolate taste exactly right!
I could see her in my mind's eye, pouring it in each block,
With a look of very obvious delight!
I pictured her in the factory never tiring of her task,
Smiling sweetly as she measured-out each glass!
But that was in the days when I still had a childlike mind,
And childhood, as we know, soon has to pass.
*
Now I watch my little grandsons as they gaze at the TV,
Goggle-eyed at all the visions that they see;
'It's not real life' I tell them 'It's only make-believe'
But I get the feeling they're ignoring me!
I only hope the monsters and the dragons and the bats,
The ghosts and frightening aliens and their ilk
Affect them, in the long run, no more than the girl in blue
Affected me, when she was pouring out the milk!
*
Posted by Rinkly Rimes at 6:40 AM