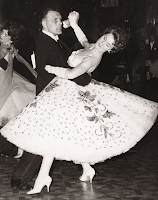 QUICKSTEP
I'm sure I never looked like this
But the atmosphere is right.
Ah! I remember the Quickstep
On any Saturday night..
In London in the fifties
We went to the Palais De Dance,
Hoping to meet our Mr Right
And a life of pure romance.
(This wasn't what the males went for
As I very quickly learned!
And many were the Saturdays
When I got my fingers burned!)
But still I went on Saturdays,
With Margaret, my friend, in tow.
Joe Loss and Billy Cotton
Put on a splendid show.
I teetered on my high heels,
And my petticoats were wide;
And we danced all sorts of dances,
Including the Palais Glide.
I didn't like slow numbers,
And the Foxtrot was too slow;
I'd almost loose my balance
As I hovered on one toe.
But the Quickstep, ah the Quickstep,
That was the dance for me!
One could spin around the dance-floor
With seeming agility.
By clinging on to one's partner
One could swoop around the room
As one's petticoats twinkled invitingly
In the romantic gloom.
And the great ball in the middle
Would be glittering up on high,
And all the ceiling was painted
To resemble a dark blue sky.
One didn't know ones partner;
He'd loomed up from the throng,
But one knew all the lyrics
Of every romantic song.
And 'Do you come here often?'
Was what people used to say.
And often we found we'd got a dud
And were longing to get away.
It was Speed Dating of a sort,
Full of artificial pleasure
But dressing for the occasion
Gave excitement beyond measure.
The Quickstep, ah the Quickstep,
You young ones will never know
The excitement of the Palais
In those days so long ago.

INVENTING ICECREAM
When we think of ice cream we think of intense cold;
Surely this wasn't available in the fridgeless days of old!
Surely electricity had to play a part!
Without our modern know-how how did they ever start?
Well, icecream isn't modern although it seems to be;
In fact it dates from way, way back in dark antiquity!
The Chinese, three thousand years ago, mixed honey with frozen snow;
It was collected in the mountains and then brought down below.
The Romans did something similar at a very much later date;
It travelled from a distance but they were prepared to wait.
In 1292 Marco Polo mixed snow with a yak's rich milk;
The resulting ice cream was creamy and tasted as smooth as silk.
A French chef invented flavours in 1533;
He mixed ice cream with chocolate! Now that's modernity!
*
So now we ask however did they keep the snow so cold?
Surely the ice it was packed in would melt in days of old!
They sometimes stored the frozen ice in deep pits in  the ground
Or down in lakes  or inside caves, where the sun was never found.
*
Imagine all those old-time cooks in the palaces back then
Receiving the summons 'More ice cream!' They'd say 'Not that again!'
Think of all the journeying, the scrambling and the fuss!
I imagine I can hear them as they'd tear their hair and cuss!
I can hear the master bellowing 'I'm not prepared to wait!
Bring me my ice cream straight away on my favourite golden plate!'
Talk about stress! Those poor old cooks combining snow and fruit!
Knowing that if they ever failed they'd surely get the boot!
*
How much more fortunate we are, when we only have to pick
Our very favourite flavour and give it a big lick!
*
-----------------------------------------------------------------------
PS

No reason for publishing this photograph, which Rebecca put on her Facebook page today, except that I think it's the best photo of her I've ever had. It absolutely captures her. Never has a daughter looked less like her Mother, but I'm not holding that against her.
*
Posted by Rinkly Rimes at 3:53 PM

Twirled us through the Quickstep of yester years. Couldn't stop laughing at all the loaded innuendos...!!!!

Rebecca looks great and the punch line in the last - greater..!!!

we were doing it in the late 60's - the quickstep, that is - on Friday nights at the Palais in Newy, while Saturday nights were rock 'n roll nights at the Uni bar .... But I remember less of the petticoats and more of the stilletto heels - oh THEY were a killer!! and kissing boys with bad breath - ugh, that was pretty dreadful too! Thanks for the memories