Would this blurb encourage you to read this book?


THE LAST
by
Peter Murchison.
The heart-rending account
Of a battle lost.
*
Trace Tallion's story
From his birth
As a tiger-cub
To his last moments.
*
Then ask this question.......
'What are we doing?'
And weep.
*
Over the years
Every attempt has been made
To preserve the species.
Read about the dedicated men and women
Who have toiled through jungles
And pored over formulae
To keep hope alive.
*
Now Tallion is dying.
And there are no off-spring.
No mate could be found for him.
*
I dare you to look into his eyes
And not feel remorse.
*
Although this is a work of fiction
It is all-too credible.
*
Not for the faint-hearted.
But definitely for anyone
With a conscience.
*
It should be in every high school.
*
Wild World Foundation: Not truth, but something greater than mere truth.
It is the truth of what may be.
The President.
*
------------------------------------------------------------------

We have just been out for a 'spin' (it seems the right word) in Malcolm's new (old) MG. I don't feel all that secure in it; I suppose it's because it's nearer the ground than the average car........and M. tends to rev up a bit when he's got his little driving hat on! We went up to Greg's place and I thought you, Mike, would like to see a shot of the rubble associated with the kitchen make-over! There will probably be a lot to do  even when you arrive next summer! 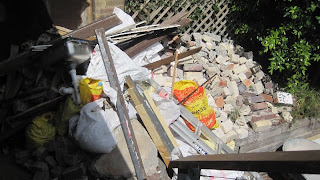 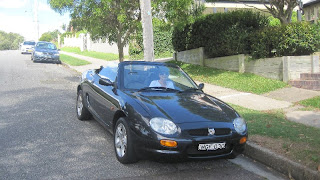 Even I have a little hat for driving with the top down!
*
Posted by Rinkly Rimes at 3:49 PM

Hi Breda,
You do look an absolute 'natural' sitting there in Malcolm's new MG.
I'm sure that you just can't wait to get behind the wheel !
I'll have to come out and help Malcolm shift some of that rubble.

I enjoyed seeing the photos of your latest production !

Your tiger book is so sad, but I fear closer to the truth than we want to think about....

I always wanted an MG - a red one, of course!

It is sad that so many of our beautiful creatures are being lost due to extinction. Your blurb is very inspiring to help save them. Loved your quote from the president, the poem and the pictures of your new car!

You hit a triple. Love the blurb which does have truth to it; the poem is wonderful and my sister, who has three boys, would no doubt agree; and the car is sporty as can be, as is the driver. :)