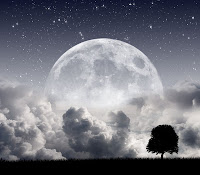 FULL MOON
(An Acrostic)
Flowering in the dark blue sky
Up there with the stars on high,
Let your light beam on us all
Lest we stumble and we fall.
*
Magnificent, against the blue;
Overhead, yet near us too.
Only the sun gives greater light;
Night without you would not be bright.
*
Posted by Rinkly Rimes at 6:08 AM

The first one is such a great take on the image!

The acrostic is lovely.

I love both of these~ I love the moon being like a flower..so beautiful~

I like them both, very good RR, the first one a bit more.