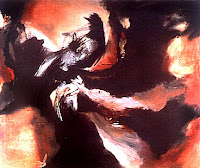 CHAOS THEORY
I believe in Chaos because it seems to me
That turbulent and messy is how things are meant to be.
Take that wretched universe! Why don't planets match?
Why on earth do they vary so? Tell me; what's the catch?
Things created the same way from the same primeval dust
Must be much more similar; it's obvious! They must.
But no! They're higgledy-piggledy; some gaseous and some not;
A completely chaotic universe is what we've finally got!
So it doesn't really surprise me when things in my own life
Refuse to be ordered and dignified, but full of mess and strife.
I subscribe to Chaos Theory. Everything's so immense,
Unmatched, far-fetched and peculiar, that nothing makes much sense.
So, when his socks get lost in the wash, my husband should not get terse;
After all, I'm obeying a Law of the Universe!
*
Posted by Rinkly Rimes at 9:14 AM

I suppose it depends on what you covet.

I always thing creativity comes out of chaos.

i think we all have done one or more of these sins without ever realizing the punishment.i truly loved this..

i have also read that you met someone from Cape Town, I am from cape Town...

loved the message in the prose!