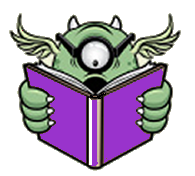 ALIEN!
I dreamed I was a Martian, with a normal Martian look,
Chancing upon a picture in a Natural History book.
A Human From Outer Space' it said, and I viewed it once or twice,
Because the ghastly creature really wasn't very nice!
It's ears were little curled-up flaps, it had a pink blob for a nose;
It stood up on its back legs in a very curious pose;
It had furry stuff on top of it's head, and also in its ears;
And its eyes were permanently washed by sort of ever-dripping tears;
It's hands were quite deformed with digits, ten of them, all splayed!
Was it any wonder that this 'thing' made me afraid?
I found myself repelled! This creature didn't look like me!
What an awful alien for anyone to see!
*
Posted by Rinkly Rimes at 6:54 PM

It does indeed surprise us at times!

Many things are stranger than fiction.

the funny thing is when stuff happens for real we couldnt think of making up!
nice haiku!

Life .. one big mysterious piece of fiction! I loved this!