JACKANAPES
A sad and sorry picture, and one that I deplore;
One that should make all normal people feel sickened and heartsore.
But this, or something similar, is needed to portray
The 'J' word, 'Jackanapes', I use in this blog today.
Monkeys were imported five hundred years ago;
Brought from Naples to England to be chained and put on show.
'Jacks from Naples' they were called, when they were taunted in the streets,
Though they were sometimes petted and given little treats.
Now one of the King's great ministers was William de la Pole,
Who had risen from humble beginnings to rise to this great role.
Unfortunately, his coat of arms portrayed a collar and chain,
And this was used to insult him time and time again.
Some hinted that he was a 'monkey', whose power should be denied,
And he was mocked and ridiculed all over the countryside.
'Jack Napes' was the name they gave him, and the name was his forever,
Though it was certainly unkind and not even very clever.
After his death the name was changed to what it is today,
( Although it's hardly used at all, in any sort of way.)
A jackanapes is an upstart, an impertinent person, a child
Who has no manners and, monkey-like, just keeps running wild.
Let us remember all victim 'apes' who've been ridiculed down the ages,
Their lives a very sorry blot on the world's history pages.
*
---------------------------------------------------------------- 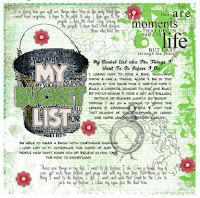 BUCKET LIST
This is someone else's Bucket List;
I discovered it on line.
When I saw the word 'bikini'
I knew it wasn't mine!
I haven't got a Bucket List;
There isn't time for one.
I'm very nearly eighty,
So my life will soon be done!
*
I expect that sounds quite morbid,
Sort of hopeless and distressed,
And anyone under thirty
Must be madly unimpressed.
But I am one of the fortunate
Who, almost without trying,
Finds myself, at the end of life,
In a state that's satisfying.
*
Daredevil tricks like abseiling
Have never held appeal
So, even in my early days,
They were never part of the deal.
My Bucket, if I'd had one,
Would always have been achievable;
No jumping off Mount Everest.....
For me quite unbelievable!
*
No, my list would have been simple,
Had I made one in my youth.
Travel, Writing, Family.
That's all, and that's the truth!
So now my Bucket's empty,
With nothing left to hold.
It all came true, so here I am
Simply growing old.
-----------------------------------------------------------------------------
PS

Please forgive me for publishing a whole new set of photos of 'Rags to Riches'. We had our matinee on Tuesday and the lighting was much better than on Saturday. I know quite a few of my Merry Maidens (?) like to check on my blog for photos. 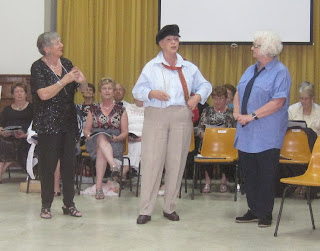 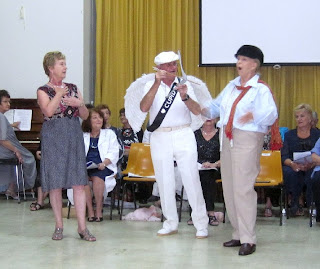 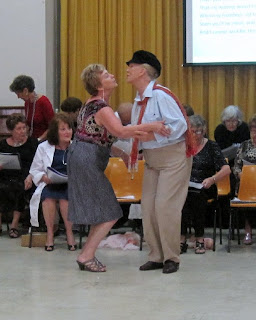 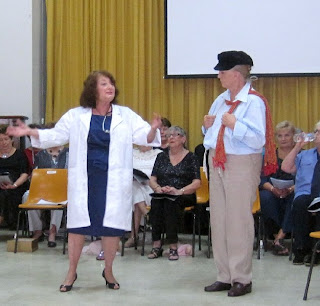 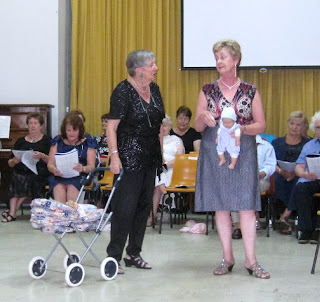 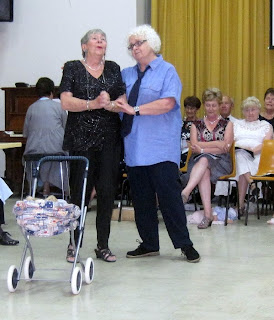 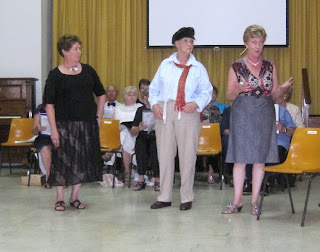 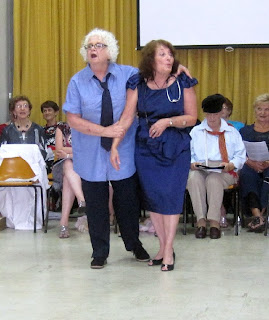 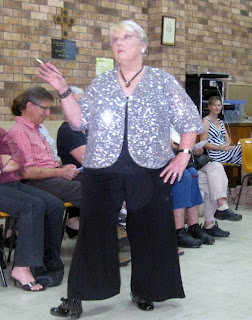 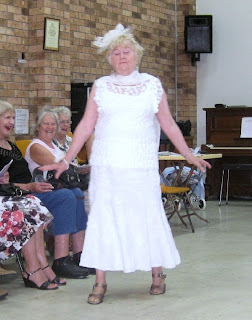 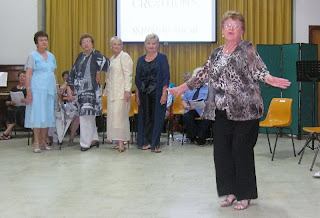 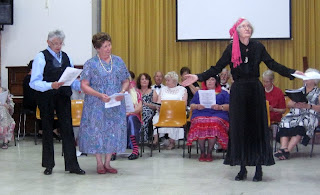 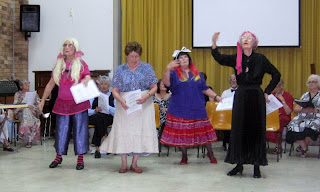 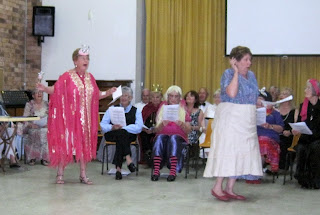 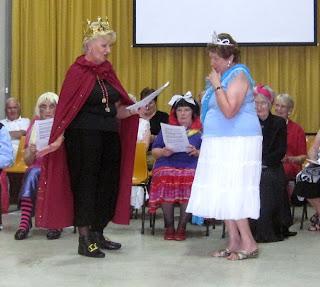 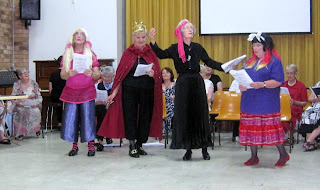 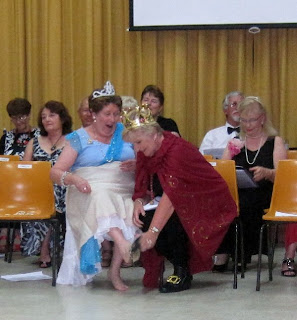 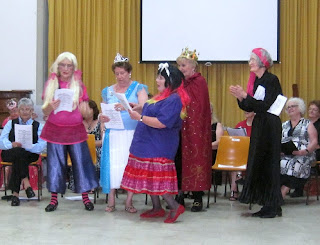 I love all the photos. They would make a wonderful
slideshow!

what fun you all had! and I love your poem about the bucket list....I feel the same and I am not quite 70....but I look back and am as satisfied as one can be-
life has been good for me and I cout my blessings every day...Cheers!

Great history of a word.
And love all those folks doing JIGS, no doubt.
ROG, ABC Wednesday team

jackanapes: I think the whole thing is wrong..!!! We must actually glorify jackanapes.

monkeys and apes after a lot of tinkering over the years have finally become man - who's these days strumming the guitar and everyone's swooning.... right?

An amendment needs to be brought..!!!

Bucket List: Your bucket is overflowing with poems Brenda.... what else do you need?

photos: Thanks for sharing the delightful event. All of you are SIZZZZZLING in the stage.

It's nice to see middle aged group having fun!

Fascinating explanation. I haven't heard that word before. It sure isn't a pleasant one.
Love your bucket list. That's like mine as well. Fun photos of your Merry Maidens. Looks like a good time was had by all.

Jackanapes: interesting and sad; entertaining and i learned something, too. Cute piece!

Sorry I'm late in visiting but at kleast I got here and I'm awfully glad I did. A fascuinating insight into the word - I'm fascibated by words and even have my own blog on the subject. Be sure I shall be including Jackanapes soon and pointing people your way.

Ouch - three mistypes! That's what comes of not doing my comment in Word first - at least there I can see it in a huge font and compensate for my awful eyesight. School report for this term will read 'Must try harder'.

I enjoyed the Bucket List. (I'm a mere 58, but can relate to the satisfaction of a life well-lived.) Bravo!