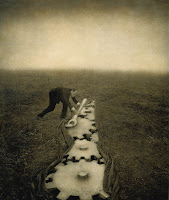 supplied the illustration
COGS
They were buried by the billions
Deep down underground,
Those un-named cogs of history
That helped the world go round.
Once they laughed and breathed and toiled
As alive as you or I,
But they were just the 'commoners'
Not the mighty or the high.
The Kings were silly mortals too,
No better than the rest;
They resembled 'cogs' themselves,
When they were seen undressed!
But they had crowns and palaces
And each sat on a throne;
That's why they are remembered
And the 'cogs' are just unknown.
When we learn our History,
Which is often quite absurd,
We learn of Algernon the Great
Or Marmaduke the Third.
But Tom, the blacksmith is unknown
And the details of his life,
And even of less interest
Is the tale of Meg, his wife.
We, too, are faceless people,
At least that's the majority;
We're common folk without the bloom
Of money and authority.
But we have our digital cameras,
Our videos and our blogs;
At least we'll leave a smudge behind
Even though we're only 'cogs'.
*
-------------------------------------------------------------------------------- 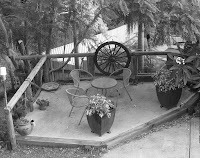 Love Google's picture of the bridge. So it was a fairly young bridge when I saw it in 1982. LOL
Excellent poem on the Magpie picture.
K

But we have our digital cameras!

Rinkly Rimes you are the queen of rhyme!! :-)

What a great take on the 'cogs' that make the world go 'round!

This was sweet and clever. Everyone gets their 15 minutes even from the bloggers desk.

I really like "Cogs." What a well-executed piece, and the sly humor in it is wonderful, esp. the bit about Meg.

And as the adopter of quite a few retired greyhounds, the first line of "Wandering Wheel" really grabbed me. Very true that one.

I enjoyed your response to the prompt. Your reflections concerning people's stature, your wonderings about the wagon wheel, and even the birthday wishes and the Sydney Harbour Bridge. Did you see the symphony playing on the bridge top railing? Thanks for sharing Rinkly.