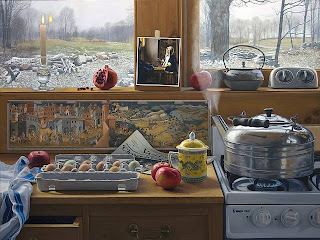 
This painting captures the mood I'm in.....
Finding glamour in the mundane.
A kitchen scene, but a candle lit
Against a window-pane.
The view outside is mysterious
In a chilly, wintry way.
And why was THIS scene special?
Life happened and he said 'Stay!'
The kettle boils, the tea-towel lies
Casually where it fell.
Each egg lies waiting to be used,
Still in its pristine shell.
I wonder, was the scene arranged?
Or was it left to chance?
Was he alone when he painted it?
What was the circumstance?
I'll never know and yet I find
Such pleasure in this view.
(The internet has introduced
So much I never knew!)
*

DREAM? NON!
'Dream on! For dreams are sweet'.....for those who dream.
And nightmares wake some folk to sob and scream.
But there are some, and I am one of those,
Whose nights are blank, just nothing-filled repose.
Think of black velvet, that is night for me,
Except I cannot feel or think or see.
I close my eyes, then open them. Night's gone!
And I have nothing to look back upon.
I have dreamed once or twice, that I admit.
I didn't like my dreams one little bit.
One left me with an awful sense of loss;
The other left me inexplicably cross!
Not only that but all the ensuing day
Was coloured by the dreaming, in a way.
The strange emotions seemed to hang around
Unsettling me, causing my heart to pound.
I'm  happy that I 'never' dream, although
It means I miss good stories; that I know,
Judging by the dreams some friends repeat!
*
I sleep on! For black velvet nights are sweet
*
Posted by Rinkly Rimes at 6:26 AM

Delightful.
I don't think my Kitchen Klutter is quite so lovely and poetic.
I love the way you Wordsmith.

klutter in the kitchen is the bane of my existence!
ROG, ABC Wednesday team