We had a great day yesterday. My Melodrama group met to discuss our next play, which is to be a 'cavalcade' version of the history of our town, Newcastle in New South Wales. It's a tongue-in-cheek look at the history with a fair bit of humour and song in it. I call it 'Taking Liberties' because I've certainly taken liberties with history, and the convict women, who are the chief characters, also had their liberties taken away. It will be quite a challenge as there are more scene and costume changes than we normally undertake. We're hunting round for a hall which has two stage entrances and doesn't cost too much!
We met at Roslyn's house, which is very large and overlooks the sea and Ros herself was a wonderful hostess. We had chicken, salad, home-made ice-cream and champagne to sustain us. Here are some of us at the table. 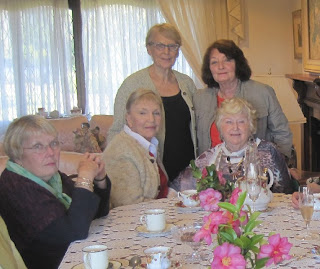 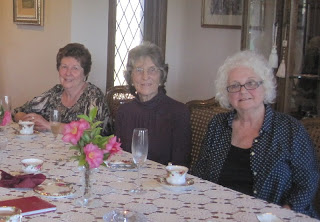 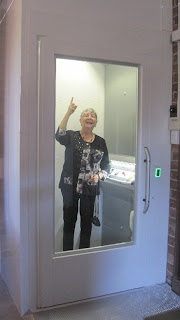 A rather strange picture of me! Ros frequently has bone problems and so she and her husband have installed a rather grand lift in their house, for future years. Hopefully, they'll never have to use it! But it was the centre of interest when we first arrived yesterday. I enjoyed my ride. As I'm pointing to heaven I may save this picture for my funeral! Just joking!
*
Posted by Rinkly Rimes at 6:35 PM

I love that you have a melodrama group! What a fun outing...and your ginger cat rhyme was perfect!