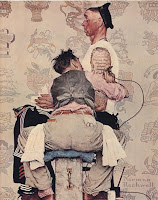 Rockwell
ABC WEDNESDAY
letter 'S'
SELF-INFLICTED!
He couldn't be more macho, this sailor home on leave!
Be we can feel his anguish, now he's folded back his sleeve.
I fear he's been unfaithful for, let's say, the umpteenth time,
And displaying a previous special name is tantamount to crime.
He's only having the names crossed-out, so his deeds will all be known,
But, when it comes to tattooing, I'm sure he's not alone.
How many people, now tattooed, will wish the tattoo gone,
When times and fortunes alter, and life has just moved on?
When time and tide, not waiting, change hair from brown to grey,
And wrinkles start appearing in a quite surprising way,
The tattoos will still linger, just hidden by folds of skin
And they'll look bigger, bolder, on arms that have grown thin!
This sailor is suffering agony, though he's trying not to moan,
And, even today, removal can make a strong man groan.
Of all the modern fashions, tattooing takes the cake.
In fifty years the young men will all realise their mistake!
*
--------------------------------------------------------- 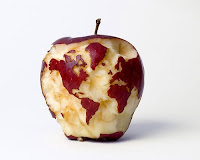 Kevin van Aelst
WORLD-CLASS NIBBLE!
Kevin!﻿ I'd be gratified
If you'd cast modesty aside
And give me access to your teeth,
Those above and those beneath!
You must be the best of chew-controllers,
Keeping in check those twinkling molars!
I could nibble the Pacific Ocean
With one great snapping-turtle motion,
For, after all, the Ocean's wide;
I could fit the great chunk inside
One cheek, turning my attention
To something smaller in dimension!
The Atlantic wouldn't be too tough,
Although I'd find it hard enough!
But the English Channel would make me quibble
With having to do a ratty nibble.
And the Suez Canal is, simply, wee,
And it would prove too much for me!
One canine tooth would be required
And the nibble would be, well, inspired!
Kevin!﻿ I'd be gratified
If you'd cast modesty aside
And admit a little blade was used!
All right Kevin!
You're not amused!
*
Posted by Rinkly Rimes at 7:00 AM

that is the reason I have ZERO tattoos!

Totally, totally delightful.
The poem about the tattoo is so very true. Love Rockwell's picture of the deed too.

I have thought of the many points you make here, and I guess they Sum up to zero tattoos on my body, but Still, I always wonder about the Story behind tattoos that I Spot, and Sometimes, I am Struck by their beauty.

In old days in Borneo, only the natives had tattoos, my Granddad had a small one, we were very embarrassed that grand pa turned native.

Here in NZ, it is a hero to have tattoos.