The Wordle
(With apologies for the dark copy) The Fashion Gurus are at again,
Treating the 'average' with disdain,
Designing clothes with 'them' in mind,
Not those involved in the daily grind.
The models, with their cobalt eyes,
And bodies of a starvation size,
Are emerging in their cat-walk gowns,
With make-up thick as any clowns,
In print and pattern and polka-dot!
We 'the rest', are a dull old lot.
Contrast them so sleek and tall,
With the average shopper in the mall!
They wont align themselves with us
As we find a seat on the local bus.
It's clear they wink behind our backs
As we waddle in our ill-fitting slacks!
Given the chance, I would vibrate
And slink and slither and gyrate,
For a year or two, till I'd made the grade
Or some young thing put me in the shade,
Then I'd let myself right off the hook
And just curl up with a juicy book.
I would retire from the stupid madness
Embracing normality with gladness.
I'd grow till I was size sixteen,
The size Nature said I should have been.
And then I'd grow placid, fat and steady.
Goodness! I think I'm there already!
*
---------------------------------------------------------------- 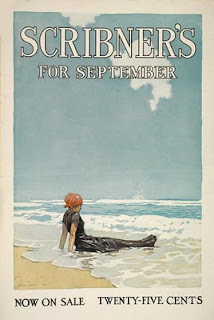 'Poor thing!' we think. 'She should be free
When she is swimming in the sea!!
How awful for her dressed up so
In solemn black from head to toe!
She must be sitting feeling sad,
Or boiling over, getting mad!'
But no! She's absolutely thrilled,
With utter, crazy joy she's filled!
She doesn't see a long black stocking
As something soul-destroying, shocking.
She doesn't see that clinging skirt
As something that's designed to hurt.
She doesn't mind that her little feet
Are covered too, and so discrete.
She only knows her generation
Can feel a lovely new sensation.
Past women folk, as she well knows,
Had to wear their normal clothes,
Merely dipping a timid toe
In the water's ebb and flow;
Hitching up their heavy dresses.....
Petticoats showing were excesses!
So this girl is quite elated,
Sensual and liberated.
Bikinis she can't visualise
And so she doesn't fantasise
About bare limbs and golden tans
And the same freedom as a man's.
So do not fret because she's clad
In garments that would drive you mad!
Let's leave her revelling, youthful, free
In her little heaven of sand and sea.
*
Posted by Rinkly Rimes at 10:01 PM

Your wordle made me laugh. Indeed, average is highly under-rated.

indeed - great wordle ... who are they to dictate size and shape, never mind cost and cut of clothes, huh?
Coming from a fashion background, this bothered me then and bothers me still ... pffft says I ... good poem