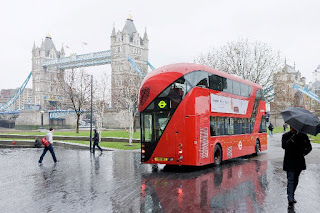 RUBY TUESDAY
UTIFUL!
Utiliarian? Certainly!
But a beautiful utility.
So I have coined a brand new word,
Which some may find a mite absurd.
'Utiful' seems to fill the bill.
This bus is not your run-of-the-mill
Clod-hopping omnibus of old,
Which was a lumpkin to behold.
True, I thought it was OK
When I caught one in London every day.
The shape, the lines were comforting,
Although the seats lacked a certain spring!
The double-decker was defined
By being rather un-designed.
This new vehicle does its duty
But seems to me a thing of beauty.
That rear window is superb,
Catching each eye at the waiting kerb.
That echoing line along the side
Makes every ride an artistic ride!
The curve of the roof is pure perfection,
Looked at from each and any direction.
It's almost worth the exorbitant fare
And hours of flying through the air,
To be back in London to join a queue
And do what Brits are free to do........
Ride this utiful thing on wheels
And find out how satisfaction feels!
*
Incidentally, look at that rain!
I'd soon fly back to Oz again!
*
-------------------------------------------------------
﻿
SIZZLING SUCCESS!
The men have returned from hunting,
All of them bold and brave.
The women and children are waiting
Deep in the depths of the cave.
The men grunt as they cut up a mammoth;
They grunt as they carve up the chops;
They grunt as they rub their stomachs.
The grunting never stops.
It's then that the women take-over,
As they bustle around with the food.
Grunting, they have discoverd,
Is masculine, rough and crude.
While the men have been been busy grunting,
The women have learned to speak!
They've been chattering away to the children
Like mad since Saturday week!
As the mammoth steaks are cooking
A strange new sound is heard;
The females of the species
Have invented a brand new word.
They have heard the sound the fat makes
As it's dripping on the flame;
They're inventing onamatapoea
Though they've never heard the name.
As the fats drip into the fire,
They let out a glad refrain!
'Sizzle!' they shout in triumph,
'Sizzle!' they cry again.
*
The men, who, still, are speechless,
Gape at this curious stunt.
And, ever since then, if you're manly,
You don't do much more than...grunt.
*
Posted by Rinkly Rimes at 6:55 PM

I have yet to see these new buses on the streets of London although I did see one at the the launch in Trafalgar Square.I need to find out which route they are on and hop aboard then I could tell you how they compare to the old routemasters - everybody's favourite London bus design

Brenda,
Just had to send a comment about your 'Utiful' piece about our new 'Routemaster' London bus of the future. Lovely writing by yourself to complement what many Brits hope will become a design icon designed by the renowned Thomas Heatherwick studios !
Iteven has an old fasioned conductor on board.