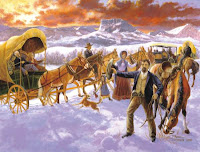 WILD WEST
(An Acrostic)
Wagons rolling, single-filed.
In the West it's very wild.
Leading over the endless plain.
Dust! No sign of soothing rain!
*
Wheels are turning; men are steady.
Every gun is at the ready.
Shots are fired! The dead fall down!
The Sherrif's men have come to town.
*
Posted by Rinkly Rimes at 8:57 AM

Both are excellent! I truly enjoyed the wild west.
Blessings

lovely thoughts indeed. nice to read this when I just came from an award celebration for my daughter who received for youth volunteer appreciation in the community.