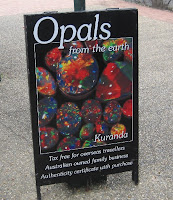 Today this country's being mined
All over, willy-nilly.
'Fracking' is the catch-cry!
Losing farm-land seems quite silly.
The lovely Hunter Valley,
With its gently rolling hills
Is fast becoming a quarry
To cure financial ills.
The scars that mining leaves behind
Are lurid, huge and vast,
Yet we know 'the mining bonanza',
Is certain not to last.
What will we be left with then?
Just great holes in the ground.
Then we'll view the devastation
As obviously unsound.
*
Meanwhile, Australia has opals,
Mined since the earliest days,
Gems used for decoration,
But not part of the mining craze.
Not gas, nor any 'useful' ore,
But more precious, I would say,
Reminding us of gentler times
In a semi-precious way.
*
-----------------------------------------------------------------

It was late, and a hiker in Ireland was looking for a bed,
Preferably in a country cottage with a thatched roof overhead.
He chanced upon such a cottage, such a very welcome sight,
And he knocked on the door and requested some lodging for the night.
Mine host was a genial gentleman who was only too pleased to say
'Begorrah! You're very welcome! This is my lucky day'.
A pot of soup was bubbling over a generous fire
And the hiker felt a bowl of soup was just what he might require.
He was slightly put-off by the great big pig which sat in the corner and eyed him;
He wasn't used to eating food with a great big pig beside him!
'Don't be concerned about Porky!' the Irishman declared.
'He's as gentle as a lamb! No need to be scared.'
The hiker was given his bowl of soup sitting in an easy chair;
The room was warm and comfortable. He was glad that he was there.
His only problem was the pig, which seemed affectionate!
Porky kept rubbing against his leg all the while he ate!
Porky grunted, Porky wheezed, Porky pushed and shoved,
As though the luckless hiker were somebody that he loved!
He tried to climb in the hiker's lap; his trotters were on his knee.
Said the hiker 'This old pig of yours has taken a fancy to me!'
Said the Irishman 'It isn't that! Dear me! Oh bless my soul!
It isn't that he's friendly....you're eating out of his bowl!'
*
Posted by Rinkly Rimes at 4:18 PM

A nice sentiment to go with your sign today! :)

It is unfortunate that despoliation of the land is seen to be an appropriate price to pay for economic security.

It is unconscionable some of these practices that are done that cause irreparable damage.