WE WRITE POEMS
http://wewritepoems.wordpress.com/
asks for our earliest memory
MITTENS
Some things I know from photographs.......
The pink coat and matching hat,
The house in which we lived back then,
Little things like that.
But the memory of the mittens
Is mine and mine alone.
It's still as fresh as it ever was,
Yet look how old I've grown!
I had mittens made from rabbit-fur,
And they were soft and white;
And there was a table.....I was small,
So it stood at a great height.
I could only reach up to the table
By standing on my tippy-toes,
So I must have been very tiny,
A toddler, I suppose.
My two mittens were always joined
By a length of elastic together;
I imagine I used to lose them
When out in the winter weather.
When I was dressed in my little pink coat
The elastic was threaded through,
Up my arms and round my back,
So losses were very few.
On the day that I remember
I looked up very high
And saw elastic on the table!
I determined I should try
To reach up and pull the elastic
And the mittens down to me,
Though only an elastic loop
Was all that I could see.
I remember feeling excited!
When I pulled they would tumble down!
And then my Mummy would dress me
And take me into town.
I reached and reached and tugged and tugged
And down those mittens fell,
And, strangely enough, that's the end of it;
There's nothing more to tell!
Except the memory that still lives
Of achieving something new!
If I could pull my mittens down
There was nothing I couldn't do!
*
---------------------------------------------------------------------- 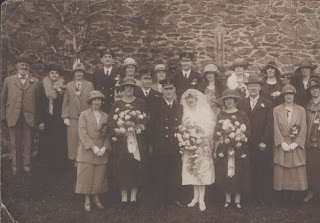 AUNT EDIE'S WEDDING
How I'd love to read the thoughts of the people in this group.
Antie Edie, she's the one in white, is about to fly the coop.
She was my Father's sister, but it seems he wasn't there!
Was he unavoidably detained or didn't he even care?
The groom was in the navy, so uniforms abound.
What were the sailors thinking as they dutifully stood around?
Reg, the husband was older than Edie, by at least a dozen years;
Is she feeling nervous? Her face displays some fears.
My grandfather is on the right, sporting a button-hole;
But my grandmother is absent; didn't she play a role?
Olive, the bride's sister, is standing by her father;
It seems she wasn't a bridesmaid! Did that annoy her, rather?
Carrie, the other sister, is to the right of the bride;
She looks much more cheerful, standing by her side.
How well did the nervous little bride really know the groom?
Had they ever been alone together in a private room?
The lady back row, third from the right, looks a bit like me,
But I don't know if we're related; do we share a family tree?
I'll never know the answers, the emotions are a mystery.
But I'm intrigued by the private thoughts in this little slice of history.
*
Posted by Rinkly Rimes at 6:19 PM

If Reg was older, how old was she? Neither of them look older, especially Reg! And what about the lady to the left of the groom - would that have been his sister, I wonder? She does look older! I wonder where this took place....Yes, I think such photos are fascinating , but I only have one and that is of my mother and father marrying, the photo being taken on the front lawn of my grandmother's house!

Yes I think memories are kind of like visuals and feeling, like your mittens are. And I enjoyed your adult musings on your aunt's wedding photo.

Such a wonderful memory to share...that mitten string tugs on my memory cords as well. This was written beautifully, the rhyme just the sweet thing for it! Thank you!

We don't forget our first achievements, that's for sure: mine was writing the alphabet in block capitals all round the margins of the newspaper, long before I went to school, so I suppose Mum must have taught me.

Your Auntie's wedding is a terrific story poem - more questions than answers, just like a lot of family history.

Yes, the mittens discovery is special because it is uniquely yours alone, and even a small act of faith, seeing at first only that strap. Nice remembering.

Love the wedding photo too, and how much of our memories are only guesses based upon such other outside sources just like this. Always to wonder, how much we remember is true and how much stories that we wondered about, maybe filling in some blank spaces in our pasts. Thanks.