HIGH FLYER
I was only sixteen when the circus came to town.
I was entranced with the elephants, the ringmaster, the clown,
But, most of all, I just adored that girl on the high wire!
My teenage soul was filled with love and an overwrought desire.
Her spangled dress, her long blonde hair, her strong, athletic thighs
Captured my heart long, long before I gazed into her eyes.
I ran away from home that night . How eagerly I ran!
The circus was deserted as I found her caravan.
'Mitzi' was painted on the door. 'Mitzi!' my poor heart sighed.
But greater joy was to follow, when she ushered me inside!
What an initiation! What a long night of joy!
What an amazing experience for a little old country boy!
Of course she was much older, but not really over the hill;
She was twenty or twenty-one; that added to the thrill.
I was so besotted that I couldn't leave her side;
I could think of nothing else although, sometimes I tried.
I'd hang around the Big Top, as I watched her twirl and leap,
Until the boss said 'If you stay you've got to earn your keep!'
So I became Patches, the foolish clown, sporting a big red nose,
And I learned some silly patter, and struck a silly pose.
I'd dreamed of being a doctor but that went by the board;
All I wanted was Mitzi, the high flyer I adored.
*
Last week another doe-eyed boy came knocking at her door.
I heard her say 'Hallo, my love! You're just what I'm looking for.'
*
Mitzi's performing her tricks tonight. She doesn't realise
I've cut one rope almost right through!
Won't she get a surprise!
*
--------------------------------------------------------------------------- 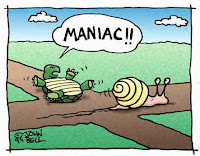 ROAD RAGE
(An Acrostic)
Ridiculous behaviour! Thoughtless and obscene!
Only an idiot would rage, if you know what I mean.
As though we can't cooperate and use the roads together
Decently taking heed of special needs and tricky weather.
*
Rude gestures never ever help they only make us mad
As for fights, there's not a one that isn't really bad!
Get wise, you drivers! Learn to share the only roads we've got!
Ending as a statistic doesn't help an awful lot!
*
Posted by Rinkly Rimes at 4:16 PM

oo a love tale gone bad...nice grisly twist there in the end...
and rather enchanting rhyme scheme...

fyi your link over at magpie does not work...

Oh my goodness, I had such high hopes for the girl on the wire, from the beginning! Ha ! Ha! As for Road Rage what a sad trip those are....if only we could find a cure!

road rage and circus rage...interesting...loved the circus story but hope he doesn't decide to drive...I doubt that he would listen to your sage advice...

The rhyme and cadence of your poem are delicious. So is the plot. Great work here, Rinkly. The little piece on road rage is brilliant. Thank you for sharing your work. =D