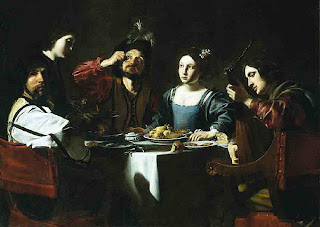 Tournier
THE MERRY MAKERS
'Let us make merry' said Pierre to Henri;
'Let us visit the local hostelry;
Let us find a wench who'll do us proud;
Wenching's something a man's allowed.
We'll hire a musician, and order food,
And get the young lady in the mood.
The younger the better, it seems to me,
When it comes to a night of debauchery.'
They found a wench in need of a shilling,
One who pretended to be quite willing.
They rented a room, the music played,
And, on the table, food was laid.
Claudette was pale and unprepared,
Scarcely formed and mute and scared.
In came Gaston, a slip of a lad,
Expressionless and plainly clad;
A village boy just earning a sou,
A boy whose heart was strong and true.
Pierre and Henri were steeped in wine;
They didn't see the girl's eyes shine.
They didn't see the look of love......
Love wasn't wasn't what they were thinking of.
The waiter fumbled  and hesitated
Serving two men he already hated.
What had she whispered into his ear?
'It's a way of making money, my dear.
Think! We can name our wedding day!
These are rich men! They will pay!'
The food was gone, the musician departed.
And Gaston withdrew,
Broken-hearted.
*
Posted by Rinkly Rimes at 10:48 AM

Great fun , R- squared, i have just started reading " the second sex" , which something in me is extremely reluctant to do .

Gauguin certainly caught a look of suffering on those faces...

Women certainly had a difficult time through the ages, manufacturing a destiny for themselves. Love your poetry. Thanks for sharing, Rinkly. =D

I am with Trellissimo....you have captured the suffering indeed!
:-)

Oh, this is superb! It is good all the way from line one, but the last line sends it stratospheric!

Reminds me of my own children when they were small...two sons and a daughter between...oh the arguments!