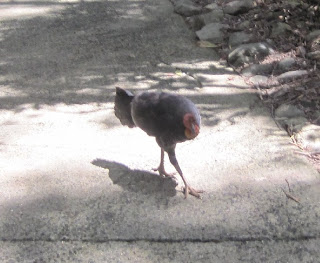 Today he walks across our path with equanimity.
For in a world of frozen meals he's overlooked and free.
And so he strides with ballet grace and looks us in the eye,
Not afraid of anything and not destined to die.
Bush turkeys were a staple food of the Aborigines.
They'd stalk them as they strutted in and out of shady trees.
For they were plump and tasty and made a filling meal
Whereas for us they merely have an artistic appeal.
How well those ancient peoples lived! The rivers ran with fish
And 'bush tucker' abounded, as much as they could wish.
In summer it was balmy for half of every year;
Storms came and went but skies were left unabashed and clear.
In winter there were furs to wear and caves to shelter in;
And they had the treasured company of others of their kin.
We feel rather sorry that they've lost the life they had;
But not this old Bush Turkey......
It's gone and he is glad!.
*
------------------------------------------------------------------------------ 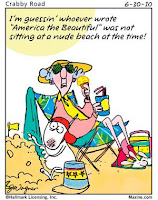 I write this in the cause of science; be quite aware of that.
I myself am far above caring about thin and fat.
I live on a very much higher plane, where body-size doesn't matter;
Normally I don't notice who's thin and who is fatter.
But cave-women came into my mind  by chance the other day.
(My mind moves in mysterious ways and this was a mysterious way!)
'When people went completely nude living in caves and such,
Letting everything hang out, did figures matter much?
Did women from the dawn of time look extremely glum,
Saying to their dearest friend "Have I got a big bum?"
Did they criticise each other, saying "Look at Elsie's neck!
How can Ernie tolerate living with such a wreck?"
They hadn't a hope of hiding flaws when they were in the nude
But did they go on diets and eat less mammoth food?
Or were they all oblivious to the differences in size,
Never thinking of comparing Rita's with Elvira's thighs?
All the cave-paintings I've seen showed people middle-sized;
Maybe no-one noticed, maybe no-one criticised.
How refreshing it must have been when we weren't all fashion's slaves!
Let's flaunt all our wobbly bits! Let's head back to the caves!
*
Posted by Rinkly Rimes at 6:16 AM

Loved both of these! Full of info and rhyming too...and funny. What more could we ask for?! :)

Brenda, your piece on Bush Tucker is simply charming! The next piece? Well, I am still laughing! I suspect that considering how they had to hunt and gather for their food, plump bums were a rarity! Great work on these two, BB!!!

Brenda ... again ... fabulous! I really do enjoy visiting your blog, you have such a sense of humour!

Brenda you write brilliantly! I love the rhyming and all the fun! I can smile a big broad smile when I visit here!

I have a feeling cave people did size each other up. In fact, science would probably support this. Although, I'm sure the more desirable partners were probably on the plumper side. It meant they were good hunters/gatherers and no one would go hungry.

Today you both taught me AND entertained me!

I love when that happens!

And you do that so well!

Thanks for sharing the bounty of your creativity with us!