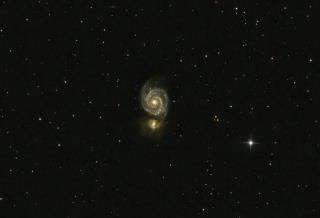 Matthew Russell
TIME TRAVEL
Do you wish to travel through Time?
Look out on the velvet sky.
But never look with everyday eyes;
Involve your inward eye.
Switch off the looking-and-seeing
We enjoy in our daily lives,
And imagine Light when it's leaving,
And Light when it arrives.
It may be all stars have perished,
And we're alone in the dark,
For it's not the Present we're viewing,
When we gaze at this pin-wheel spark.
Twenty-five million Light Years
This view has been travelling to you!
Yet we marvel at this beauty
And treat it like something new!
This star may now be a Nothing,
In a Black Hole or turned to Gas!
It may have shrunk to a tiny dot
Or be an enormous mass.
Had men been around when this star blazed,
And we know that they were not,
They could never have gazed at this certain star,
This shimmering diadem dot,
For they'd have been looking at something else
Already incredibly old!
They might have looked at the Big Bang
(Which didn't exist, we're told!)
When Cavemen looked up at the starry sky
What wonders did they see?
For they, too, were Time Travellers,
Much like you and me.
And what of intelligent creatures
Gazing, now, from on high, at our earth?
They don't 'see' us as we are now,
So what is their viewing worth?
If they could see an enlargement
They'd find very different creatures!
Just elemental living things
With very different features!
So what do we know about anything?
Precious little it seems.
But we can Travel in Time right now,
And enjoy the Land of Dreams.
I know that I'll die not knowing
What the whole damn thing's about.
It makes my head ache just thinking!
I'll leave Matthew to work it out!
Matthew Russell is my cousin's son and I have just re-met him on Facebook. There I discovered that his astronomical photographs are considered very fine by those in the know. This is what he wrote to accompany this shot:
Last night's quick photo of M51 the brilliant iconic gem the Whirlpool galaxy! How ace is it! 2 galaxies M51a and M51b colliding, the white dust around the smaller galaxy is actually millions of stars being flung around! I don't really know what would happen to the planets that surround these stars, the scale maybe soooo huge that they don't really feel it! Strangely even though their are billions of stars in a galaxy when they collide it's highly unlikely a star will hit another star! much more likely is gas to interact and make new stars, and supernovae, So with galaxy collisions you get more heavy elements therefore more chance of complex life!
My poem is a feeble effort to make some sense of it all!
*
--------------------------------------------------------

QUOTE "All the world's a stage, and all the men and women merely players"
AUDIENCE OF ONE
If all the world's a stage
With an audience of One,
Is He sitting there in judgement
From the time the play's begun?
Is He holding his auditions
And declaring who will act
And is He doling-out the roles,
On a stage which is tight-packed?
And are we merely players
Like puppets hung on strings,
And is He in charge of properties,
The crowns, the shining wings?
Since He has sprinkled attributes
Among the fawning players,
And sorted men and women
Into variegated layers
With successes at the very top,
The mediocre in between
And the failures at the bottom,
Not allowed upon the scene,
Achieving even a walk-on part
Is like crying for the moon,
Even if we act quite well
And can even hold a tune!
And if the 'audience' likes the play
Will there be a standing ovation?
Will He thunder-clap his god-like hands
In a heavenly proclomation?
It's all too hard for me, my friends,
I feel much more at home
With those very human, squabbling, lying,
Gods of ancient Rome.
*
Posted by Rinkly Rimes at 5:52 PM

When Matthew talks of there being a more complex life when the stars collide, I take it he is talking about the complexity of matter, not the complexity of 'life' (humanity). I can think of it only as watching a more complex fireworks display, orchestrated by humans. Is it possible that some sort of 'being' (life form) is orchestrating what he sees? And when global warming takes effect here, what will 'they'(?) be seeing from there, I wonder. What if Matthew could view the same view from the moon - would that make it any easier to
explain what is happening, I wonder. I am groping here, of course, trying to find the best questions to ask!