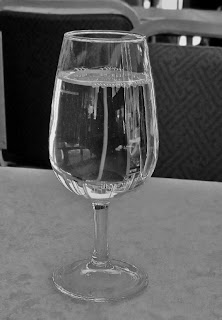 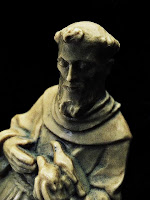 THE RESCUE
Saint Francis, quite austere in stone,
Stands in the local park, alone,
Hands outstretched and face benign,
Features both austere and fine.
And, suddenly, a pigeon lands
On one of the slender, outstretched hands.
Then more come flocking from the sky,
Attracted from the blue on high.
They float and fly and flaunt and flutter……......
*
But, suddenly, there is a mutter;
‘Birds are nasty, messy things,
So much more than beaks and wings.
Tomorrow, this statue will be smeared,
Wherever the pigeons have appeared,
With nasty droppings they have made.
Worse than graffiti, I’m afraid!’
Thus speaks the Lord Mayor, with great pride;
‘It’s time those wretched pigeons died!
Tomorrow morning, I decree,
The local park will be set free
From nasty, filthy little birds.
We’ll shoot the lot! You mark my words!’
The Lord Mayor sleeps both long and deep,
Dreaming, in his mayoral sleep,
Of slaughtered birds lying all around
And mutters ‘Dead birds on the ground.’
*
But, in the morning, goodness me!
What a wonderful sight they see!
Little birds, now turned to stone,
No longer things of flesh and bone,
Nestling, safe from every harm,
In the crook of a saintly arm.
Hands..... no more outstretched....... caressing,
And giving each bird an eternal blessing.
*
Posted by Rinkly Rimes at 12:48 PM

The wine glass is a fine shot. What a shame those reflections fail to remind you of the occasion, but they look so good.
Love your pigeon story too.

Such a nice shot! Great post for W-B&W!
Have a nice Pentecost!

You have done it again! Great shot for b/w!

On its own, the picture expresses something about travelling, people on the move. Could have been a restaurant on a railway station. Regards :)

love your rhyme and the mysterious reflections in the glass.