XMAS IN JULY!
'I'm certain you invented it!' says Vera every year!
She was in-on it the first time, and thought it rather queer.
I'd certainly never heard of it, which accounts for the surprise!
And, to use a rather archaic phrase, it happened 'on this wise'.........
*
Way back in the nineteen-eighties our mothers came to live,
So our lives had to be altered, something had to give!
On Christmas Day I asked them if they'd like traditional fare,
December here is blazing hot, so I thought they wouldn't care.
But no! 'We must have turkey, and Christmas Pudding too!
Without the normal festive meal whatever would we do?'
So said the Matriarchs as one, so I hadn't got much choice.
Mothers are mighty powerful when they're speaking with one voice!
December the twenty-fifth dawned hot and then got hotter still,
A little chicken salad would, for sure, have filled the bill.
Nevertheless I laboured, in the kitchen in the heat,
Determined that I'd give them the traditional Christmas treat.
We all sat down at lunchtime, the hot feast was prepared.
'Too hot! We just can't eat a thing!' both of them declared!
To say that I was acid is putting it quite mildly,
I went back in the kitchen and threw pots around quite wildly.
'That is the last time in my life I'll make such a mistake!
You'll get a salad on Christmas Day, with, maybe, a slice of cake!'
*
But July came, the air was chill, and I found that I'd relented.
I'd cook them a Xmas Dinner, even though they'd not repented!
'We'll have Xmas in July' I said, off the top of my head.
We'll have our festive dinner now, not when it's hot, instead'
My children fell-about, of course, they thought the idea quite mad,
But then, they've felt that way before about other ideas I've had!
I said they could ask friends around but they said they'd rather not!
'Christmas is in December! Christmas is when it's hot!'
I asked some neighbours from down the street, some of them even nearer,
And also I asked some other friends, one the pre-mentioned Vera!
She thought the idea was crazy; she made no bones about it.
And even my husband, Malcolm, had a few moans about it.
However, the room was cosy, the food was hot and piping,
So everyone enjoyed the feast and I heard no more griping.
Remember! A 'Xmas in July' still hadn't been invented!
I'm pretty sure of this although it isn't documented.
* 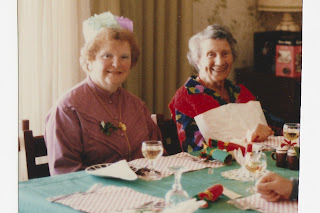 (My mother right in red, enjoying the first one!)
*
The following year a grand hotel put on a festive meal,
And then, like Topsy, the whole thing grew, till now it's quite unreal.
Every Club and Organisation has a 'Xmas in July'.
Malcolm's going to one next week; the next week so am I.
I can't stand singing Carols; that aspect makes me cringe,
But it's all part of 'tradition' now so I don't even whinge .
The turkey, the Xmas Pudding and every other treat,
Go down well when it's chilly. They're anathema in the heat.
So you'll find us, next December, eating something very light.
We'll be on the beach with a chicken-leg if things work-out all right.
Vera still says I invented the 'Xmas in July'.
But I am not too certain! Read on and you'll see why
*
Christmas in July is a 1940 screwball comedy film written and directed by Preston Sturges based on his 1931 play A Cup of Coffee. 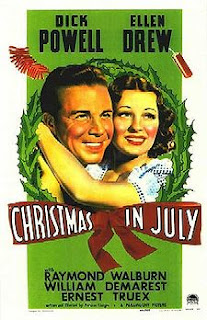 Great post! I have to admit I miss Christmas in the winter, but I'm learning to adapt.

You may not have invented it, but you made it popular!

I adore this poem! Hard to imagine having a July Christmas feast in our 110-degree heat. All we want is icewater and salad.

It would seem strange having Christmas in July although I have to admit I don't care for our cold weather. If the weather was as hot as you have I think a salad would serve me well.