BRY ANTICS
July 5th
On the world scene I suppose the partial US withdrawal from Iraq was the big news. I must say I feel very uneasy about the future of that country. With so many warring tribes it's possible only a dictator can rule and so the country will soon be left wide open for another Sadam! I hope not, but it seems likely. Our local news has been dominated by the Battle of the Beach! That sounds quite fearsome, but it only means that there's a big disagreement over the future of Merewether, our local beach. It's a bit run-down at the moment, that's true, but that's part of it's charm, and developers want glass buildings several storeys high to replace the faded Art Deco places. The population is split down the middle as you can guess. Below is one of the ideas 50% of the people are rejecting. Watch this space!

We celebrated Greg's fortieth birthday on Sunday. When I say 'celebrated' that word doesn't completely cover my attitude. Of course, I was delighted to cook a lunch for the whole family and to have them all under my roof, but I'm a very nervous entertainer, even when the guests are my relations! I'm not a confident cook. I lie awake plotting and planning the perfect meal, even making-out a time-table teacher-wise, but, almost immediately something goes wrong and I get edgy. I'd bought Greg's little boys fizzy drinks not realising they'd never been allowed to have them before, and the shock of the bubbles caused Max, who's two, to spit the whole lot out all over the table!! However, everything went off fairly well; we had prawns, followed by Chicken a la King, and birthday cake (bought). My lovely daughter, Rebecca, came up to me in the kitchen and said 'This isn't really your scene, is it Mum!' How right she was! (I picture myself as a lovely fat Italian Momma, carrying out a big vat of delicious spaghetti to her admiring brood, seated under the trees! But my efforts never resemble that at all!) Anyway, here we all are at the end of the day (Malcolm took the photo.) 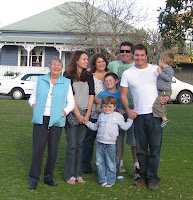 The children don't look too keen!
On Monday I went to 'The Beaches' for lunch. This hotel is one of the places under discussion regarding the beach improvements. The owner wants to pull it down and build a convention centre! I shared a meal with my friend, Loretta, because the helpings there are so large. It was a pleasant gathering. Afterwards we had Choir Practice and we were given our new folders to organise for the next concert. 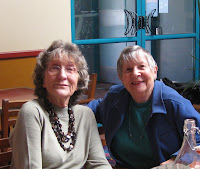 With Loretta
On Tuesday we rehearsed 'Unhand Me!' ready for next week's performance. Malcolm had to have his afternoon nap with his ear-phones on! Everyone dies in the play and I like them to expire with agonising screams! On Wednesday there was another rehearsal, but this was a more low-key one, as I just went up to the church to practise with the equipment for when I give my photo presentation later in the month.
On Thursday the choir performed at a local drop-in centre. We held our folders, of course, and I think we sang more confidently because of that, but we'll have to condense the pages so that there's less turning. Pam, our conductor, got very friendly with a dear old boy who got quite carried away by our performance! 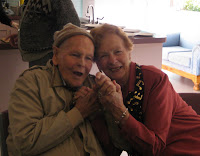 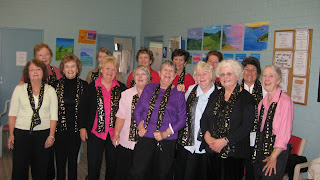 Our pianist, Lois, is on the right.
We had a 'Jewelled Jeopardy' rehearsal on Friday afternoon, but there were a lot of absences. I'm a little concerned that circumstances have caused delays with this little production. I don't even know whether we'll be ready for our end of year 'Friends and Family' evening. So I'm writing a few more stop-gap things just in case.
Saturday morning was a bit of a mess. I'd planned to go on the Walk with the Walking Group, but Rebecca was going to have to take Blake all the way to Branxton, in the Valley, for a soccer match so M. and I said we'd go with her, Brian being on duty. Then Brian turned up, but too late for the walk! Instead I went to the Markets, which I love. The weather was sunny but chilly, so the stall-holders were rugged-up, as well as the drum band.

Till next week.
Brenda
Posted by Rinkly Rimes at 10:23 PM

You are a very busy lady. I don't think families concern themselves so much with what is on the menu only that they are together sharing in the celebration. You are blessed to have such a family.

The glass building that you show does look a lot more attractive than the apartment blocks that overlook the ocean and board walk at places like Long Beach, Long Island. But can such a building withstand stormy weathers, or perhaps your coasts are less bothered by extreme seasonal weather patterns?
Yes, birthday celebrations are hard work, so the 'children' do it themselves and I am invited these days! That is a relief and more enjoyable.

Another full week in your life! You make me realize that I am such a slacker!

You have a very nice looking family and they look well fed. Prawns are my favorite thing (along with Lobster) and I far prefer them over spaghetti. I am sure the fizzy drinks episode will lead to a lot of laughter in years to come.

Hi Brenda, I had a sneak peak at your diary while it was still Saturday here in South Africa. This morning early, while lolling on my electric blanket, trying to motivate myself to get up and brave the cold, I thought, I have to tell Brenda this: with a brain like yours and the talent for writing verse and prose, who wants to be able to present gourmet dinners? I think you DID have a wonderful dinner and as Bogey says above here, family enjoy the get-together so much (especially at their parents' home) that food plays a very small part in the celebration. I loved your diary as always and wish you a blessed week ahead.