BRY ANTICS
July 19th
'In the Deep Midwinter".....one of my favourite Christmas Carols. I suppose one can hardly apply it to coastal Australia but it's certainly been very chilly this last week. We actually feel the cold quite severely here because the houses etc aren't designed for cold weather. Also, we don't own heavy coats etc. We don't heat the houses during the day. We switch on the heating cycle of the air-con while we have breakfast and again while we have supper, but most of the time we just complain! All this in a place where the temperature rarely drops below 16 degrees celcius! The photo below is current but, obviously, not here. It's of interest, though, as it depicts a place in Victoria devastated by Bush Fires earlier in the year!

World news has been dominated by the terrorist acts in Indonesia. We are particularly involved with our enormous Muslem neighbour, and all has seemed to be going well there on the democratic front. Let's hope the perpetrators are caught. We were also interested in the Moon-landing remembrances. Malcolm and I, living then in a TV-less South Africa, slept right through it! How, I can't imagine, as Greg was only two weeks old! But we did!
Our local news has been dominated by the story of the young English backpacker lost in the Blue Mountains for twelve days, and surviving sub-zero temperatures! People were delighted he was rescued, but there are a few murmurings about his earnings, and whether he will give anything to the Australian rescuers, who spent millions on his case. As you can see, he was lost in very rugged country!
Last SUNDAY was a quiet day but, on MONDAY we had a delightful time. I was invited back to the Central Coast, where we used to live, to entertain a group with my poetry. The group was the Hospital Auxiliary, who raise money for local hospitals, so it was all worthwhile. But what made it even better was that I met-up with very dear old friends, Toni, Narelle, Pam, Joan and Brian. Here I am receiving my gift of a bottle of wine. 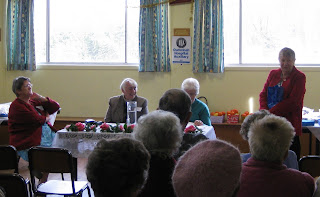 TUESDAY and THURSDAY were quiet days. I tried to get my blogging up to date as I'm going to take a holiday from it in August and catch-up with some other jobs. But on WEDNESDAY it was all go-go-go again as it was Scrabble Day. Usually, I supply the venue and the others supply the food, but once a year I have a Soup Day. (I'm lousy at pastries etc, but not too bad at casseroles and soups!) Here's the soup bubbling away in the morning. I'd just stirred-in the cream!

And here are Les Girls apres-soup! I was particularly pleased that Sharon, facing, had two servings! She's been very ill and this was the first time since becoming ill that she's requested a refill! High praise indeed! 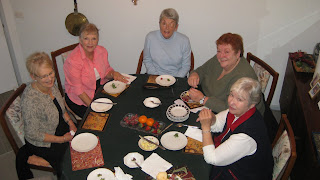 THURSDAY AND FRIDAY were quiet again. It's School Holiday time so we don't see the grandchildren regularly as we do in term-time. But things were hectic on the domestic front nevertheless! The sliding-door into the kitchen stuck and proved to need new rollers. That was one big job.Then the dryer broke down (for the umpteenth time) so Malcolm went off to buy a new one. He returned with another item as well. I'd been complaining for some time that my electric fry-pan looked decrepit (though still working) and he brought back a Creature from Outer Space! Well, don't you think it looks like one!

On SATURDAY evening Rebecca came round. Blake had gone to a sleepover party, and Brian was on duty in Sydney. We had supper at the Club round the corner, and then we watched a video of 'The Changeling' which I found almost unbelievable but very gripping.
And so ends another week.
Till next time.
Brenda
Posted by Rinkly Rimes at 3:42 PM

That seems like the best kind of alien to have in your kitchen... The 16'c must have matched some of the temperatures around UK yesterday, and we're calling it Summer! But now it's sunny, after a day of thunderstorms and torrential rain - and at least no snow! Don't you just love England's changeable weather map?!

Hi Brenda, we have the same temperate winter weather you do, although here in the Free State, the night temps drop to below zero (only just) Our homes are also not geared for cold weather... Well done on entertaining the folk with your wonderful poetry and for a good cause too. Lovely to meet up with old friends too. I LOVE your soup and Scrabble day. Have a wonderful week. Jo

Brrr. sounds chilly. The young boy's survival is pretty impressive.
Hard to believe NASA didn't save the original film of the moon landing isn't it.
Didn't appliances used to last longer? I'm replacing the dishwasher and the oven this week. :-)