BRY ANTICS
July 5th
I hardly used my camera at all this week! On one occasion I forgot to take it with me, on another I became so engrossed in what I was doing that I forgot to use it, and on the third occasion the battery ran out! So there wont be many Happy Snaps.In the world a lot of people watched the Michael Jackson saga avidly, even here in Newcastle, but I'm afraid I'm a bit too 'stiff upper lip British' and the whole thing struck me as over the top so I didn't watch. However, I was very interested in the G8 and G20 goings-on in Italy, although I think it will all prove to be just another Talk Fest. Our international news is that an Australian has been imprisoned in China for commercial espionage; lots of diplomacy going on! And, of course, there was the Cricket, which goes on and on on all channels well into the night! Australia is playing England for The Ashes! Luckily M. and I have dual nationality so we're bound to win!

Locally, our big buzz was the fact that Jerry Seinfeld has made a commercial for one of our local Building Societies called 'The Greater.' As he's only ever made two other commercials and they were both for huge organisations (I forget which) this was quite a coup for our little town. In this shot you will see the name 'Greater' but it was actually shot in a New York street! 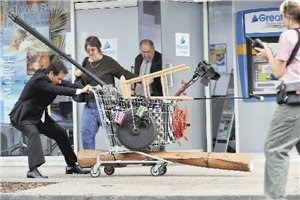 On Sunday we delivered Greg's birthday gift to him. You may think it's an odd one! We've had some 1920s garden furniture mouldering away in a corner of our little garden for, literally, years, and Greg said he'd like it, This is because his house was built in the 1920s. The facade hasn't changed but he's built a large family room on the back. The front veranda has been in need of furniture for ages, so M. said he'd refurbish our old stuff for his birthday. It actually looks quite nice and in keeping. Here are the boys trying it out! 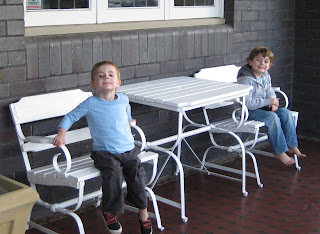 Monday is normally Choir Practice Day, but we didn't have a rehearsal this week so I just lazed my day away. But on Tuesday my mini-melodrama group put-on a ridiculous little play at a local club. It's called 'Unhand Me!' which will give you some idea! It was the first time we'd done it and we were all delighted with the result as the members of the club performed it after us and they all let their hair down! The program was shorter than expected it to be, so I was glad that Carol was there to play the piano and lead the group in a singsong. (My children think the idea of a singsong is too, too awful, but it always goes down well and we'll incorporate it into the regular program.)
On Wednesday I went to my Speakers' Club and gave the vote of thanks (nothing too taxing!). It was an excellent program. The topic was 'There are no stupid questions; just stupid people' and I'd been glad that I wasn't rostered to speak as my mind was a blank. However, all four speakers not only found things to say but were hilariously funny. With sixteen people there it actually seemed possible that the Club might survive and I hope it does.
On Thursday I went to a Birthday Party. Friend Betty turned 69. The gathering was held at Mary's and she lives in a large house, right on the cliffs overlooking the beach so it's a lovely venue. I'd organised dips and crackers to take, but I forgot them! There was so much food that I don't think anyone noticed. At night-time we Baby-sat Harry and Max as Greg and Michelle went out to a Trivia evening. The boys were a dream! They toddled off to bed without a murmur. I found Harry a very difficult toddler (not naughty but dismissive, somehow) but he's turned into a really charming boy lately. Here's Malcolm supervising some play with plasticine before they went to bed. 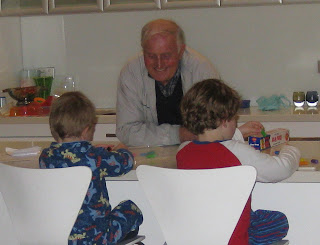 On Friday we rehearsed 'Jewelled Jeopardy' and I was delighted with the turn-out and the way everything went. We have a new member and she fits-in beautifully and we were all less tense. Now I must learn my words (I'm the Gold-Digger!) You'd think I'd know the words as I'm the author but I find it very difficult to recall what I've written: I'd rather ad lib but that would upset other people. Greg brought the boys round later and Harry was singing lyrics of popular songs all in tune. I was impressed. Rebecca and Blake came to supper as Brian was on duty. I made a chicken and mushroom bake thing but, as usual, it was less than perfect and Blake wouldn't eat his! Next time we'll eat at the Club! Rebecca tried to get my mobile-phone photos into my computer, but, once more, we lost our way. Technology!
Today technology has let me down again. I'd washed all the bed-linen and I was just about to give it a final spin, after a while in the wintry garden, when the dryer went 'Bump!' and stopped. I think we'll have to buy a new one. Other than that I blogged! Delicious!
Till next week.
Brenda
Posted by Rinkly Rimes at 6:56 PM

I think refurbished antique furniture is a great present! If you wish to gift me with some, I'd take it gladly. ;)

You're business exhausts me! How do you keep up with yourself?