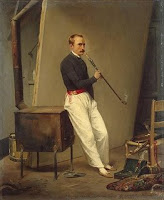 
FANCY DRESS!
'Portrait of the artist' a familiar sort of title.
But here's a portrait of a different kind.
Too often we are shown an artist looking quite dishevelled,
With, behind him, some great art-work he has signed.
Maybe he wears a beret, that is French in its conception,
And a paint-bespattered flowing sort of smock,
And the studio's untidy, with an uncared look about it,
And the atmosphere is verging on ad hoc!
The whole effect's Bohemian and terribly romantic!
We feel an artist's bound to look that way.
But here is Horace Vernet looking like an average person!
Like a military person, I would say.
And, indeed, that is the answer to this very odd persona!
His paintings tell the story, as you'll see.
He was a War Historian, his art was like reporting
However overblown his art might be.
For Vernet painted battles, painted battles by the dozen,
Working at a quite amazing pace.
Wherever there was fighting and a little bit of bloodshed
This artist would be working  on the case.

Here is his famous painting of a mascot in the army,
A dog who's either wounded or distressed.
The people of the era found the picture very moving
And many other like scenes so impressed.
Painting after painting, in a very quick succession,
Came from his brush as his country went to war
And though Horace was no soldier, he began to like the life-style,
Being fascinated by the things he saw.
As the years passed he was noted for his very rigid bearing,
For the fact his voice became so brusque and harsh,
He had a military hair-cut and, most obvious of all things,
He sported an enormous grey moustache.

So the answer to the mystery, the 'unromantic artist',
Is the life he led, resulting in the role.
Although he was a painter he delighted in the bloodshed,
And  the scent of battle entered in his  soul.

A short, concise biography in rhyme. You never cease to amaze me.

Cameras being unavailable in those days the artist had to probably quickly churn out battle scenes, in canvas.

His twirling moustache, I suppose is sign of his bravery..!!