Cruising Down the Murray 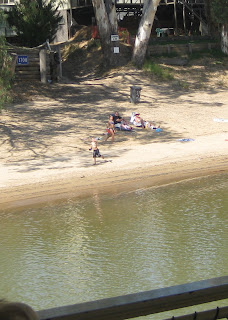 WATERY WEDNESDAY
http://waterywednesday.blogspot.com/2009/07/watery-wednesday-45.html
I took this shot earlier this year when we cruised the Murray River.
I'm afraid I've been reminded of a rather corny song from my youth so I've parodied the words.
'Cruising Down the River' won a BBC competition in 1945. I think it must have been the seed for the present Eurovision Song Contest!
CRUISING DOWN THE MURRAY
Cruising down the Murray on a sunny afternoon,
Beneath the trees
We took our ease;
Life was just a boon.
The sky above was blazing
Like a gorgeous blue balloon!
Cruising down the Murray on a sunny afternoon.
A boy ran by
And shouted 'Hi!'
And we all waved a hand.
The gum trees made
A welcome shade
Above the golden sand.
Aboard our paddle-steamer
We were in our own cocoon,
Cruising down the Murray on a sunny afternoon.
*
QUOTES
"The authors were two middle-aged women who wrote the song to win a British songwriting contest in 1945. In June of 2005, I received confirmation of this from the niece of Lou Preager, the gentleman who actually conducted the contest and awarded the 1000-pound prize to two such women".
"The two women worked at Kennards department store in Wimbledon, a place frequented by my mother in days gone by. I'm not so sure they were middle aged, as some suggest, they might have been younger, I'm not sure. But I well remember the event!"

"The song was written by two members of Tolly and her trio, who played in the genteel café at Elys, Wimbledon. They wore long black gowns, and played an undemanding repertoire of light classics and popular songs on violins, cello and piano. I was at school nearby, and we used to drop in sometimes for a quiet giggle. They certainly seemed middle-aged to us, though that's unreliable - everybody looks middle-aged when you're fourteen. "
*
Another corny parody for the housewives here:
http://rinklyrimes.blogspot.com/2008/07/52-move-over-marlene.html
Posted by Rinkly Rimes at 7:40 AM

I like that song and can see why they won. Fun image to go along with it.

A great poem. Definitely goes well with that tune.

I be they were only about thirty! As you say everybody looks ancient when you're young.

I really enjoyed your parody, it admirably conveyed the feeling of a slow leasurely trip, I could feel the bright sunshine and the river gliding by.

the river, cruiser and sunbathers - all look great