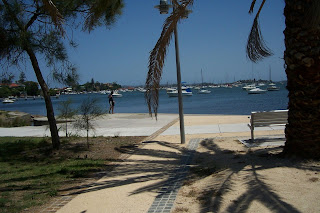 NO MISTAKE!
The shadows of the palms cast an aura of  perfection.
This lovely lake is near us in a southerly direction.
How could they have christened such a venue Reid's Mistake?
*
A certain Captain William Reid sought which route to take.
He was sailing, in eighteen-hundred, to survey the new-found land,
And he came to what he thought a river, with banks on either hand.
He didn't sail far up the 'river' but returned to his Sydney base
Where he was surprised to discover that he was in some disgrace.
The Hunter River was northward, what he'd found was a lake!
And for many years the waterway was known as 'Reid's Mistake'.
Then, later, there was a Governor of the state of New South Wales,
Who was famous for his diligence, recorded in many tales.
They named the lake 'Macquarie' after this well-known man,
And a township was established, according to the plan.
Now locals are delighted to enjoy their special lake,
And for certain it will never be described as a 'mistake'.


A wider view of the lake here:
http://rinklyrimes.blogspot.com/2009/03/extra-shallows.html
Posted by Rinkly Rimes at 1:26 AM

Poor Reid. It wasn't as though he had a GPS system!

I am still enjoying your history set to rhyme. Keep educating me!

I'm guesing that this is your shadow shot? I clicked your link in Mr Linky and kept scrolling and scrolling...you are the most prolific poster! I'm impressed!
great photo and intersting post :)

If mistakes were to be named after people, there'll be plenty I suppose :)))