BLACK AND WHITE
REFLECTIONS﻿
LITTLE ENGLAND
There's a little part of Perth called Little England,
At least I recollect that was the name.
The architecture's pseudo Medieval
And being ultra-English is the claim.
The shops are olde worlde, full of little knick-knacks
With Union Jacks all blowing in the breeze,
And there one buys big tins of English toffees
And other Pommy things designed to please.
Of course, it's rather ersatz and commercial,
Especially on a day of blistering heat,
But two old Poms like us felt quite at home there,
Back in a sort-of, made-up English street.
*
-------------------------------------------------------------------- 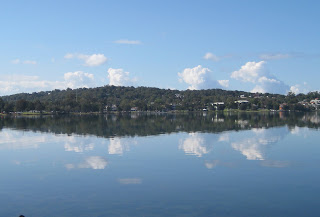 RORSCHACH VIEW!
Herman Rorschach did you sail upon our local lake?
And did you look across the bay and do a double-take?
Did you see a view that made you sit up at your oars
And there and then design the test that is uniquely yours?
A Rorschach Test uses a blot to delve into our minds.
Here is one, although, of course, there are lots of other kinds.

﻿
The idea is that when we look and think and cogitate
We'll say what we're reminded of! And, thereby, hangs our fate!
For if we see a demon it means that we're depressed
And if we see two bunnies we're not at all distressed.
(Of course I've made that nonsense up for I am no mind-reader!
Maybe, if you see bunnies it means you're a rabbit-breeder!)
*
I'll psychoanalyse myself with the picture of the clouds
Floating along in unison above the madding crowds;
Making patterns in the sky to soothe the troubled soul
And patching-up the tattered mind, and making half-hearts whole.
Maybe, when we think we need to try analysis
All we need is the calming touch of a vision such as this.
*
--------------------------------------------------
PS
Yet another performance of 'Tiddly Pom' yesterday! It was to  a much larger and very appreciative audience in Newcastle. It was our fiftieth performance since we started the group! (Different plays, of course.) 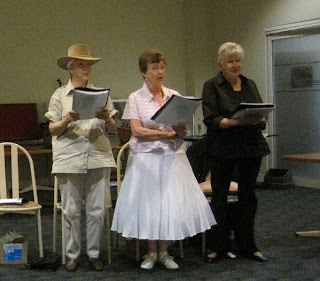 Pam and the two Joys in full voice. 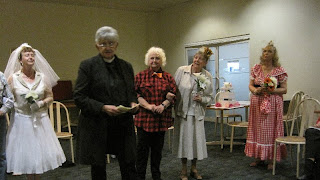