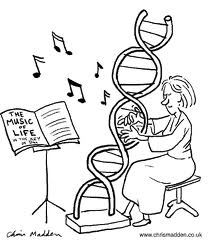 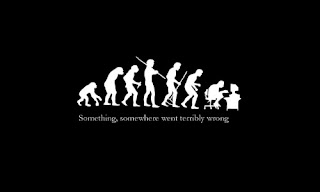 MANY A TRUE WORD!
"Many a true word spoken in jest."
When was Mankind at his best?
Rising to two legs was a gain
But now we're sinking back again!
Did we swing down from the trees
To merely live a life of ease,
Crouching over a little screen,
In a shape reminiscent of the Pleistocene?
That noble creature, centre-stage
Belongs to a much less 'civilised' age,
But did his sons grow extended thumbs,
Stunting the growth of their craniums,
Gazing, with hypnotised satisfaction,
At a little screen, which breeds inaction?
Oh the curve of that human graph!
If it wasn't so sad it would make us laugh.
*
Posted by Rinkly Rimes at 6:27 AM

Well, Brenda, if this is true, your offspring are missing out on something wonderful, because you are the funniest poet since Ogden Nash.
— K

You may be recessive but I'm sure your daughters don't think so. To know such beauties came from you gives you the A+++, 3 gold stars in my book.

i never found you recessive, or regressive. maybe obsessive!

I've always liked recessive genes. They're quiet, and stay mostly off by themselves. :-)

sweet rhymes. The Genetic Misfit reminds me (fondly) of the Darwin Awards! Thanks for the smile I leave with.