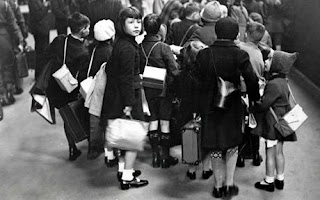 QUEUING!
A word well-known to the British but Americans say 'line'
So 'Queue Here' would be useless if written on a sign!
I think it started in The War, when there was little food,
And pushing to the counter was considered rather rude.
And here we see a quite pathetic Evacuation Queue,
As little children stand in lines, not knowing what to do.
The expression on the girl's face says it all, it seems to me:
'Where are you Mum?' her eyes say 'I'll be brave as I can be.'
Gas-masks at the ready, one suitcase (one allowed)
Little children swallowed-up in a very alien crowd.
They couldn't really understand that a World War had begun.
(I know all about it....... I was one.)
*
Posted by Rinkly Rimes at 4:42 PM